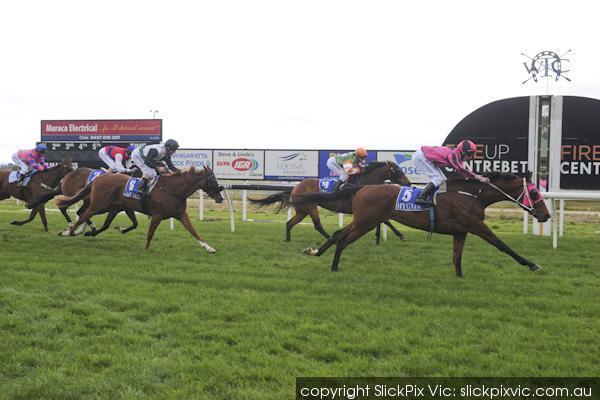 The flexibility to be able to train out of a spelling paddock at Emsley Lodge has proved a winning formula for lightly raced five-year-old Torsion.
The son of Carnegie underlined the importance of the farm environment when he regained winning form, powering home to score at Wangaratta on October 14.
Co-trainer Jamie Edwards said Torsion had been a challenge to train because of his poor appetite, and that being able to vary the horse’s environment had been the key.
“If there is one horse in the stable that is a real test for having the farm, it’s him,” Jamie said.
“He's a really difficult horse to train because he just doesn’t eat,” Jamie said.
“He has shown us a heap of ability but he's lightly race because he doesn’t hold his condition.
“Most of our horses normally get 8-9 kilograms of feed a day and he only eats about 6kg, which for a horse his size just isn’t enough.”
The stable has used a variety of measures to stimulate Torsion’s appetite but it was not until he was transferred to a spelling paddock with another horse that he started bloom.
“Now that we’ve put another horse in with him and he’s trained out of one of our spelling paddocks where the grass is up to their knees, he is a different horse,” Jamie said.
“He has come through in the coat and seems to be eating a lot better and is much happier.
“Now we can train him whereas before if we gave him a hard gallop he would stand at the back of his box or yard and wouldn’t eat for four or five days.”
Torsion’s success is a big tick for the farm because without the facilities here he would have been unable to realise anything like his potential.
Torsion has won three of his 13 starts and congratulations to his band of owners – Greg Badgery, Michael Barrett, Jason Barry, Bruce Bartley, David Battistella, Tony Blakeley, Glenn Bradbury, Andrew Brice, Jean-Pierre Canal, Mel and Steve Cochrane, Ben Danckert, Wayne Davis, Robbie Dore, Ray Dummett, Janet Edwards, Bernie and Sonya Grossman, Nathan Guerin, Pauline Jenkins, Martin Joyce, Andre Lakkas, Phil Lusher, Matthew Maiden, Jim Mann, Grant McDonald, Gordon Murdoch, Coralie Nash, Michael Petrocca, Alistair Rayner, Peter Sandars, Darren Sandars, Grant Sandars, Joe Scuderi, Brett Suckling, Renard Swanson, Craig Tognolini, Loretta Toohey, Jarrod Whytcross, and Todd Williams.
His win in the Judds Menswear BM64 Handicap (1590m) at Wangaratta looked a sign of better wins ahead.
Ridden by stable apprentice Josh Cartwright, Torsion finished strongly from worse than midfield to score by a length from Sophie’s Tryst.
“There was good pace on and everything went right for him, but having said that he raced well and was strong on the line,” Jamie said.