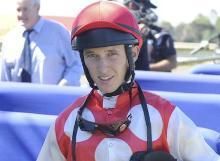 Like any eager young jockey, Josh Cartwright wanted to be a part of the metropolitan racing scene as early as possible.

The boy from Albury understood he had to cut his teeth on the provincial circuit but after a successful first couple of full seasons in the saddle he thought he was ready for opportunities in town.

Those opportunities did not really present themselves until this year, but Cartwright, now 19, realises he still had more learning to do and is in fact glad those earlier opportunities he coveted did not arise.

It has him perfectly placed to make the most of the period in the racing year that he and his apprentice colleagues are most in demand.

“The timing’s actually worked out really good,” he said. “It was a little bit frustrating, because I didn’t really get going in town until the last month, but I think it’s probably worked out for the best.

“Through winter I’m going to have a three-kilo claim and that’s handy to have when you’ve ridden nearly 120 winners.

“I’ve got 14 winners left on my city claim until I’m down to two, so I’m just keen to make the most of that through the winter. I should be able to get some nice opportunities is I keep working hard.”

Cartwright is one of six apprentices with the benefit of a 3kg claim who have rides at Moonee Valley this Saturday.

Patrick Moloney, Harry Coffey and Katelyn Mallyon, who all claim 2kg, are other apprentices who will ride at Moonee Valley.

It’s not surprising trainers keen to use Cartwright, who sits second behind Moloney on the Victorian Apprentice Jockeys’ Premiership and has ridden seven winners since 9 March including metro-class success at Moonee Valley and Mornington.

Cartwright, who spent a year in his home town first with Norm Loy and later Brett Cavanough before joining Jamie Edwards and Bruce Elkington two years ago, already boasts a career-best season of 48 winners despite there being four months of the season to go.

“In the country I’ve been going really good, I’ve been riding plenty of winners, and the main thing I’m trying to do now is just stay consistent.”

Cartwright is delighted to not only secure rides in half the races at Moonee Valley, but the standard of mounts.

Cartwright’s other mount is the Robbie Griffiths-trained Cascabel ($21) in the Device Technologies Australia Handicap.

“They’re very nice rides, my manager (Ron Kavanagh) is doing a very good job, and it’s good for those trainers to give me that opportunity, especially Robert Smerdon to put me on a horse like Shamal Wind,” Cartwright said.

“She’s a Group 1-quality horse and to be able to ride her this weekend is just a great opportunity.”

A good showing at Moonee Valley this Saturday should ensure many similar opportunities present themselves in coming months.