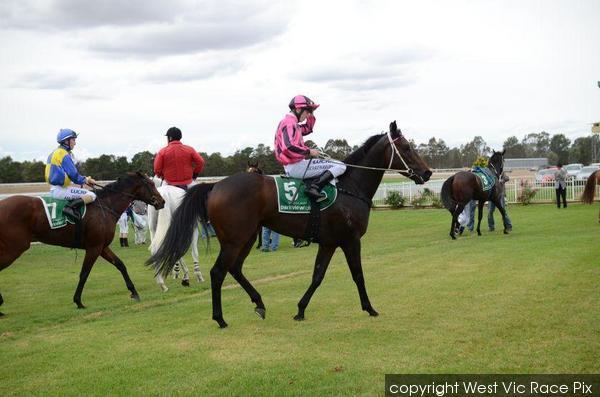 A CHANGE of scenery has sparked Tempest Rock to an Ararat maiden victory with his new stable.

Despite a lack of success in his first 13 starts, the owners showed faith in the four-year-old and transferred him to Emsley Lodge where he has thrived in the country surroundings.

His recent jump outs had been encouraging and punters latched on, backing the Rock Of Gibraltar gelding from $3.10 to $2.50 favourite in Tuesday’s Ararat Harvey Norman Maiden Plate (1318m).

Stable apprentice Josh Cartwright gave Tempest Rock the perfect run on the rails, just off the pace, and set up the win when he urged him between runners on the home turn.

For most of the straight he was locked in a desperate two-horse war with Revel In the Chaos, but drew clear late to score by three-quarters of a length.

“It was a nice win and he gives me the feel that he will be better off over a mile,” Josh Cartwright said.

Tempest Rock is a son Tempest Morn, a dual Group One winner of the Australasian Oaks and Storm Queen Stakes, who was also runner-up in the AJC Oaks, SA Oaks, Queensland Derby and Queensland Oaks.

He cost $35,000 as a yearling but failed to live up to his pedigree when tried in longer races last campaign.

Part-owner and Geelong Advertiser racing writer Ryan Reynolds recommended Emsley Lodge to his partners as an ideal new home for Tempest Rock, and he is pleased he did as the gelding is his first winner.

“They have the horse flying,” Ryan said.

“He used to lay in and over-race but we have seen none of that since he’s been at Emsley Lodge.”

Co-trainer Jamie Edwards said Tempest Rock had benefited from the uphill gallops at the farm and the stable was optimistic he would run well first up with winkers removed from his gear.

“We were happy with him. He had trialled up beautifully a couple of times and he seems to go best when fresh,” Jamie said.

“He is loving his new surroundings and hopefully he will go on.”

However Josh Cartwright is unlikely to be riding Tempest Rock next start after suffering a badly broken thumb when dislodged from Saburo in the third race at Ararat.

The injury will require surgery and Josh expects to be sidelined for five weeks.

Congratulations to all the winning connections of Tempest Rock – Well Done!!!