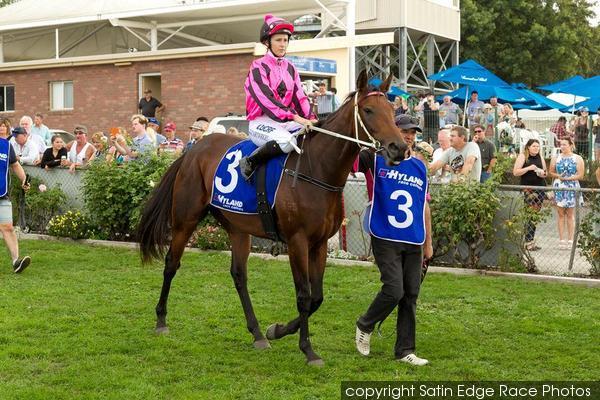 Emsley Lodge apprentice Georgina Cartwright capped a big week when she combined with trainer Jamie Edwards for their first winner together at Stony Creek on Sunday.
Just three days after being awarded the Victorian Wakeful Club’s Apprentice Jockey Training Program Scholarship, Georgie posted a stunning victory on Kawabata in the "Williams Tracy & Associates" BM64 Hcp (2100m).
Georgie had won three other races since her riding debut at the end of December, but this one was special.
“I was eager to get my first win for win for the stable.
“I’d had a few chances but been unlucky.”
Georgie was particularly excited for the owners who stuck with her after Kawabata failed at her previous start at Bendigo when she pulled up with high white cell count.
“I was really happy for Jamie and the owners, who still put me on after the last run,” Georgie said.
Kawabata was an eventful ride at Stony Creek and took a while to find her rhythm in fifth place, two back on the rails.
“The horse in front went pretty quickly and I was just positive on Kawabata and trying hold my spot, but she was only just on the bridle,” Georgie said.
“She wasn’t travelling that well but once we started to quicken from the 800 metres she really let down on the soft ground. She loved it.”
However, a check near the 600 metres when going for a tight run stopped Kawabata in her tracks.
“I tried to take a run on the inside but there wasn’t really enough room,” Georgie confessed. “It was probably a bit ambitious.”
Kawabata lost momentum and was then held up as the race appeared to slip from her grasp.
“I really didn’t get out until the 400 metres but by then the leader was 10 lengths in front I thought ‘I am never going to catch it.’”
Even the race-caller had given up on Kawabata at the top of the straight, but he had no sooner declared the two leaders had it between themselves, when the race changed.
The leader began to falter, the second horse was struggling and Kawabata, under Georgie’s vigorous riding, was coming on with a full head of steam.
She made up six lengths from the 200 metres to 100 metres and within another seven strides hit the front, charging away in the closing stages to score a 1-3/4 length victory over Our Delinquent who had looked home for most of the straight.
By Encosta de Lago, Kawabata is a daughter of Queensland Oaks and Derby winner Riva San and has now won four races, two of them this campaign.
She is a mare on the rise and looks set to build a lot more on the $45,000 prizemoney she has earned for her owners Victoria Bennett, Brett Collings, Mark Dakin, Steven Dick, Janet Edwards, Tony and Sue Egan, Linda Gilmour, Ashleigh Hunnam, Brett Jaques, Tom King, Guy Lamperd, Mary Laupert, Tim Lawson, Jim Mann, Craig Moyle, Meredith O'Callaghan, Charlotte Paton, Sue Piggott, Marg Piggott, Maurice Quigley, Peter Sandars, James Tucker, Nadia Tucker, Colin Turnbull, Brian Wescott, Sally Wescott, Michael & Linda Wescott, and Andrew Wu.