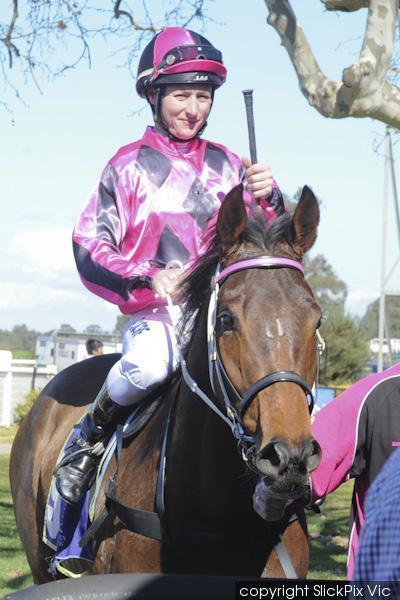 Lightly raced four-year-old Spherical looks to have an exciting staying future after he bounced back from an interrupted campaign to post an impressive maiden win at Wangaratta.

The son of Encosta de Lago was having first run since recovering from a cold earlier in the month and gave his rivals wind burn, charging home from near last to land the G.A. Cheshire & Sons Maiden Plate (1590m) on Saturday.

Ridden by Linda Meech, Spherical spotted the leaders 12 lengths mid-race but ate up the ground after being hooked out seven or eight horses wide at the top of the straight.

A drifter in betting from $6 to $9, he scored by a neck from the Mick Price-trained Democrat Queen ($15) and $2.10 favourite Laughing Lad, from the Peter Moody stable.

Spherical has raced only three times, and was an encouraging last start third over 1600 metres at Coleraine at his second start on July 26 before his setback.

Impeccably bred, he is a half brother to 2008 AJC Oaks winner Heavenly Glow, but he didn't attract much interest as a backward yearling at the 2012 Inglis Easter Yearling Sale.

Patience has been the key to making a Spherical a winner, although there were real doubts early on that he was going to make the grade.

"He showed us nothing at the start," Jamie recalled.

"He wasn't fast at all but we held out that his pedigree would shine though in time."

"What I liked about his work was that he got to the line full of running."

Time was against Spherical making the three-year-old classics last season but the way he won at Wangaratta suggests better wins are ahead of him.

"He has taken a long time to mature but now the patience of all the owners is going to pay off and he should only get better as the race distances increase," Jamie said.

"At Wangaratta the race was run to suit when they went hard, but I thought the way he rounded them up the last 200m was really, really good.

"You would think on that effort he would go on with it now, and he looks like he is going to be a beautiful 2400-metre horse which is why we bought him.

"We will take him through his grades, and next start a 1900-metre or 2000-metre race will give us a better idea of how good a stayer he is."