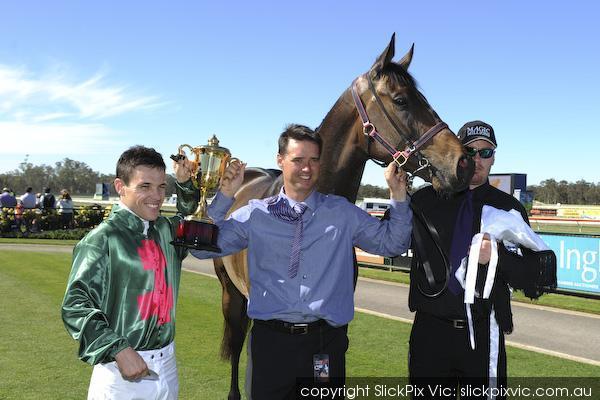 Sertorius puts distance doubts behind him to win Bendigo feature

Originally set for the Toorak Handicap, the Spring plans of the six-year-old were changed when he appeared to be looking for further ground following his second-up run over 1500m at Moonee Valley in September.

That decision by co-trainers Jamie Edwards and Bruce Elkington proved a masterstroke when the son of Galileo put a recent twisted fetlock injury behind him to win the Bendigo Jockey Club’s premier race.

Admitting it was the first time that he really felt under pressure with the horse because of the injury, Edwards revealed that the final decision to take their place in the Cup wasn’t confirmed until this morning.

“I was really upbeat about him winning the Geelong Cup and he had a little hiccup and the final decision to run him today wasn’t made until around 7.30am this morning,” Edwards said.

“He’d had a quiet week because of the injury and it was his first try at a mile-and-a-half (2400m) so there was a definite query on it.

“One thing we’ve always been mindful of with the horse is that we’ve looked after him. He’s very lightly-raced for his age and I would have kicked myself if I’d brought him here and he pulled up sore. I just wanted to make sure he was 100% over the injury and he obviously was.”

Settling in the box seat, Sertorius ($3.80F) travelled kindly during the run before Ryan Maloney eased off the back of the leaders’ heels and into the clear at the top of the home straight.

Taking the lead from Kesampour ($7) at the 200m mark, Sertorius drew clear to defeat Massiyn ($8.50) by 1.5 lengths, with Kesampour just under a length further back in third.

Maloney said Sertorius had demonstrated to him all preparation that he had been looking for the extra distance.

“All his form’s stacked-up and today we drew a good gate, he began well and it was a beautiful tempo,” Maloney said.

“Today was the first time I haven’t had to ask him to track up into the race, he did it himself and put them away, it was never in doubt.

“Last preparation he was a bit fresh and a bit brilliant to run the 2400 metres right out but he’s got a lot of ability and Jamie’s done a terrific job to get him up to quick to be ready for the 2400 metres.”

Congratulation to Mike Palmer pictured with his horse.