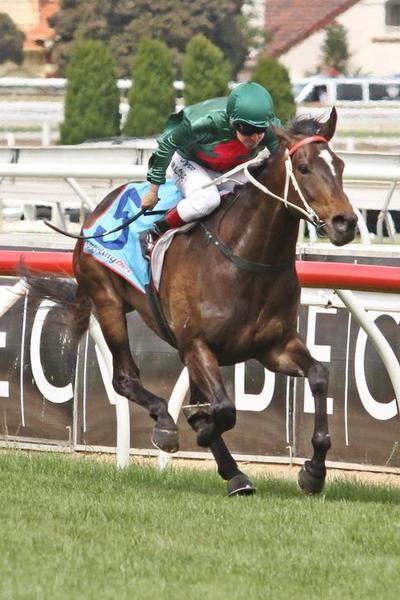 GEELONG trainer Jamie Edwards will take it one step at a time with stable star Sertorius, who crushed his rivals at Caulfield yesterday.

Sertorius was a dominant three-length winner in the $80,000 Bluecross Community and Residential Services Plate (1600m), commanding the race at the front before kicking away in the straight.

Edwards, who is co-trainer with Bruce Elkington, played down the win, despite the gelding stamping himself as a horse to follow throughout the spring.

"I couldn't be any happier with him, third-up over a mile is what I wanted to achieve with him and we were able to do that today," Edwards said.

"He ran about half-a-second quicker than the Group 1, so he has done a bit of time.

"Certainly we won't be getting too carried away with the win. It wasn't a Listed or a Group win. It was only a restricted grade race and they always look good.

"The best part of it is that he is carrying weight and he is running time.

"He is the one sitting on the pace. It isn't like he is sitting back and doing nothing to sit home. He does all the donkey work in front and runs away from them."

"If not, it will be Melbourne Cup day, Derby day or Stakes day – he will go to one of them. Maybe the Eclipse Stakes or Ballarat Cup, something like that.

"This preparation was all about seeing how good he was. We keep raising the bar with him and he keeps jumping nice and high."

The well-backed Sertorius ($2.80) had no problems getting to the front from the awkward barrier, allowing jockey Ryan Maloney to control the race's tempo.

"He hit a little flat spot, but as soon as I put one on his tail, he really responds," Maloney said. "He really toys with them."