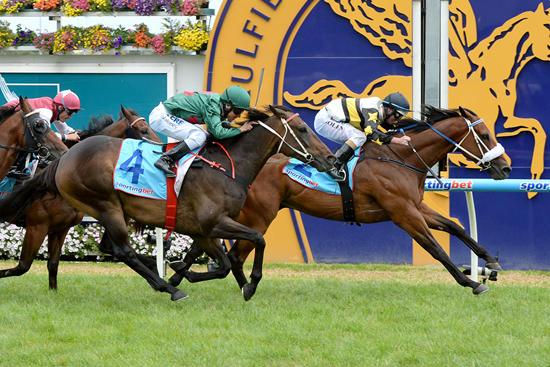 SERTORIUS is on track for the Sydney autumn carnival after a powerhouse performance and seemingly unlucky second in the Group One Futurity Stakes at Caulfield.

First-up since the spring, Sertorius missed the start by two lengths and flashed home the last 100 metres to run Moment Of Change to a long neck in the 1400-metre feature on February 22.

Sertorius’ sectionals were remarkable and co-trainer Jamie Edwards said the run was everything the stable had hoped to see.

“At home he seemed to be flying, but we went into the race with a very open mind,” Jamie said.

“I don’t want to get ahead of the cart, but on what we have seen so far he does seem to have improved again this campaign.”

“I couldn’t have asked any more of him on Saturday and he seems to have pulled up well,” Jamie said.

While Sertorius was slow from the gates, Jamie doubted that it affected the result of the Futurity.

He said jockey Ryan Maloney made the best of a bad situation and had the Sertorius placed just off midfield on the rails after 100 metres.

“If anyone had told me before the race he would jump with them and find the exact same spot as he did after missing the start I would have been rapt,” Jamie said.

A significant aspect of Sertorius’s performance on Saturday was how well he travelled in the race.

Last spring, in his first two runs over 1200m and 1500m, he was the first horse under pressure but there were no signs of stress on Saturday.

“They were really running along and he tracked in to the race beautifully,” Jamie said.

“His last 100 metres was sensational. He made up three lengths and ran past some good horses.”

Extreme heat earlier this month delayed Sertorius’ campaign and he missed a crucial first up run in the Group One Orr Stakes (1400m) at Caulfield, which derailed his Australian Cup plans.

He will still run on Australian Cup Day on March 8, but in a support race, the Group Two Blamey Stakes (1600m) which will determine if he heads to Sydney where his primary target would be the $1.5 million Group One The BMW (2400m) at Rosehill on April 5.

“The Blamey will tell us where we are going with him,” Jamie said.

“He is lightly raced and we are certainly not going to over-tax him now.

“If he is thriving and there is still plenty left in the tank we will head off to Sydney, but if he has to have a light autumn to set him up for the spring he will.”