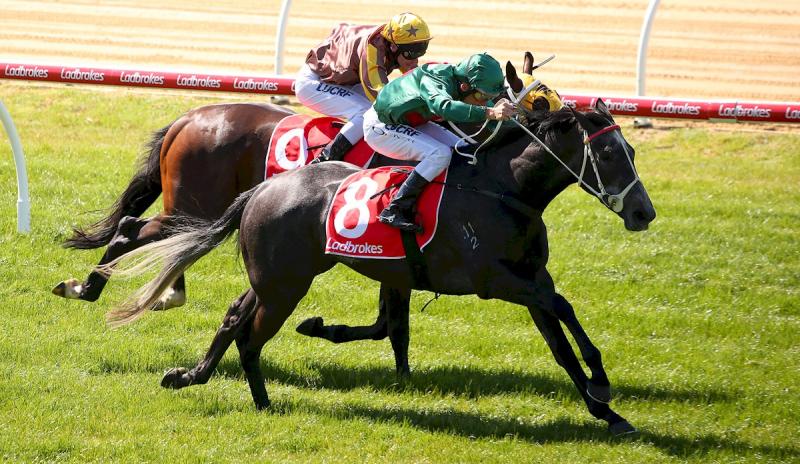 Promising four-year-old mare Roldana underlined her staying potential when she came from last to score a hard fought maiden win over a Victoria Derby aspirant at Mornington on Wednesday.

Trainer Jamie Edwards said the way the daughter of Mastercraftsman finished off the 2025 metres bodes well for the future in even longer races and she may now have a crack at a stakes race while at the top of her form.

“I absolutely love seeing staying types get to the line like she did,” Jamie said.

Ridden by Damien Oliver, Roldana made her run from near the 600m with Derby hope and odds-on favourite Anaheim, taking the lead passing the 200 metres and fighting on strongly for a half-length victory in the Labrokes.com.au Maiden Plate (2025m).

Aristocratic was 4-1/2 lengths away third in a field that strung out 30 lengths to the finish.

Loyal owner Mike Palmer bought Roldana for $NZ35,000 after she was passed in at the Karaka Yearling Sales, and he races “Julie’, as she is known around the stable, with his wife Beth, Julie Shaw, Ewan Evans, Terry Kennedy, and Shane O’Brien.

Unfortunately, Mike was on holidays in Bali and missed Roldana’s win, which was her ninth race start and followed three second placings including one at Moonee Valley in December.

Oliver has been important to Roldana’s improvement, but Jamie said stable apprentice Georgie Cartwright was a big part of her success.

“A lot of the credit goes to Georgie – the way Roldana is racing and settling in her races,” Jamie said.

“She is not the easiest horse to ride trackwork, but Georgie has done a fantastic job.”

Whether Roldana steps up to stakes grade now will be decided in the next couple of weeks.

“It is spring time and she is at her top so we might give her a crack at a decent race and see how she goes,” Jamie said.