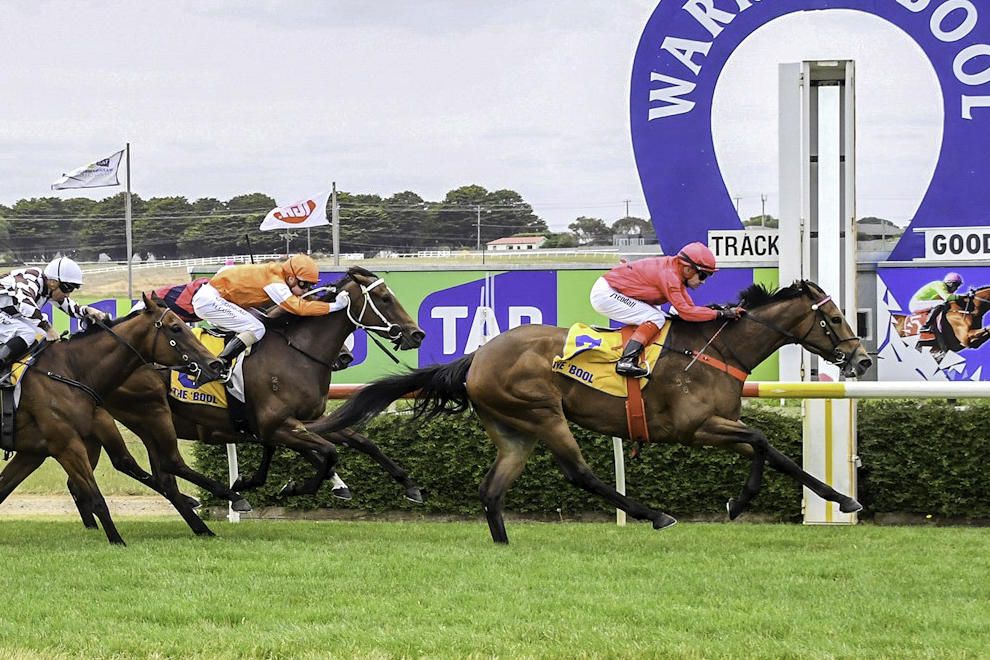 A horse that Emsley Lodge named in support of a campaign for Geelong Breastcare nurses today made a spectacular winning debut at Warrnambool just three weeks ahead of the annual Pink Angels Race Day at Geelong.

Sporting the name of the campaign and ridden by Dean Yendall, Pink Angel exceeded expectations with the victory in the Toot Traffic 3YO Maiden Plate (1100m) coming with strong home straight finish to score by a length from Poppy’s Orse and Ostara.

The win was a training triumph for Emsley Lodge with Jamie Edwards describing the win as particularly satisfying.

“You train a lot of winners, but every now and again you get one which is quite special like this,” Jamie said.

The stable was anxious that Pink Angel, leased from Rosemont Stud, would do well for the charity but the daughter of Starspangledbanner proved very difficult to train and her race debut postponed at least twice in the last 10 months.

“I have always considered her a pretty good horse, but she has certainly been challenging to train,” trainer Jamie Edwards said.

Pink Angel’s Race Day co-organiser part-owns Pink Angel and many of her partners in the horse cheered with such gusto that they can be heard in the background of Adam Crittenden’s Warrnambool race call over the closing stages.

“Jamie and Janet are good friends and I approached them to do a race day five years ago but never imagined we would have a horse run in our name.”

“We’re now able to buy post-surgical garments for ladies in Geelong who go through breast cancer.”

Emsley Lodge donates a percentage of her prizemoney to the Pink Angels Race Day and last year provided four shares in the filly free of training fees for 12 months as part of a fund-raising raffle.

“It has taken a lot of time to get this filly to the track and with her slow maturity we have had to carefully manage her,” Jamie said.

“I told the owners would have been happy to see her running on and finishing fourth in the six-horse field and to get a win with her on debut is very special.

“She is still has a lot to learn and will only get better.”

The win has potentially paved the way for the Pink Angel to race at Geelong on Pink Angels Race Day on Sunday, January 26.

“Watch out if she runs that day,” Jamie said. “It will be some party if she can complete the fairy-tale and win.”