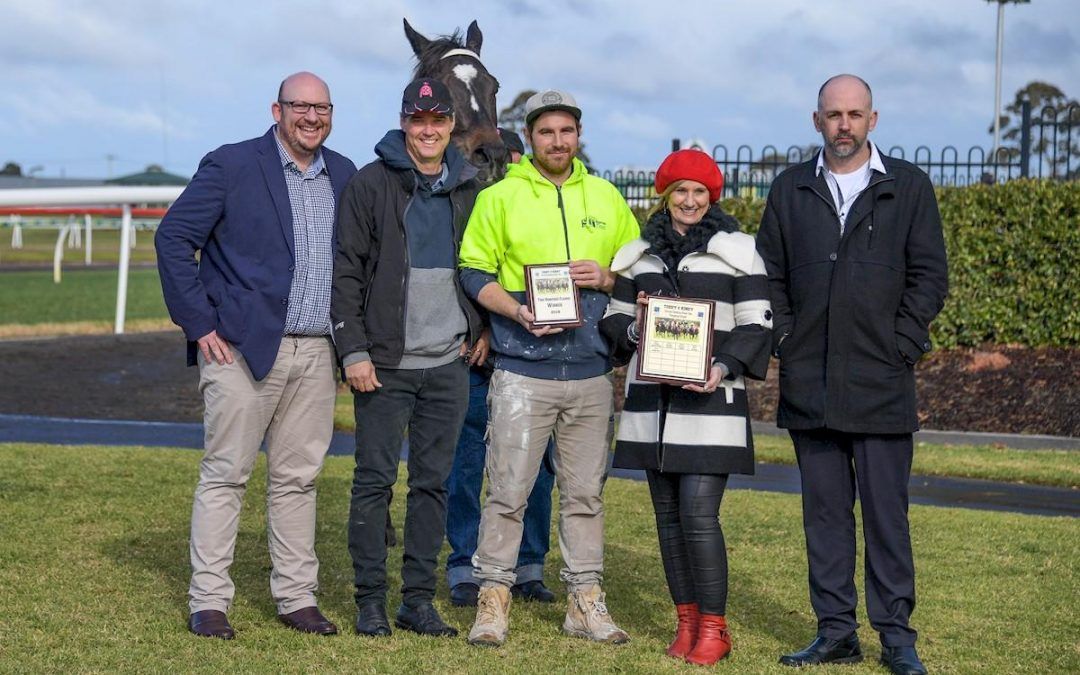 Post-race celebrations rivalled that of a Geelong Cup win after four-year-old Petronas posted her maiden victory on Friday.

Trainer Jamie Edwards was elated as he entered the mounting yard at Geelong with his hands in the air to greet his mates Tom King and Todd Nicolich who have been the race sponsors for the last six years.

“I’m absolutely rapt to win this race named after for Kingy and Toddy,” Jamie said.

“They have been good mates of mine for a long time and just great genuine Geelong blokes.

The Toddy & Kingy Time-Honoured Shield Maiden Plate was born at a St Joseph’s junior footy race day in 2013 when Tom and Todd chipped in to sponsor race.

It is now an annual event and a perpetual shield was made a year ago to go with a plaque which is presented to the winners each year.

It was a special win for April Trimboli whose husband Rick named Petronas.

Petronas had run some promising races with six placings in her first 13 runs before scoring impressively at Geelong.

Jockey Damien Thornton was under instructions to try and go forward outside the leader, but he was unable to get better than three-wide at any stage of the race and was four-wide just off the pace from the 600m.

Thornton said despite the tough run the daughter of Medaglia d’Oro Felt as though she would entering the home straight.

“When I gave her a smack she lengthened out nicely and put them away.”

Under hands and heels riding the last 180m, she raced to the lead approaching the 100m, and cleared out to win by three lengths from Kyd Rock and Storming Princesse.