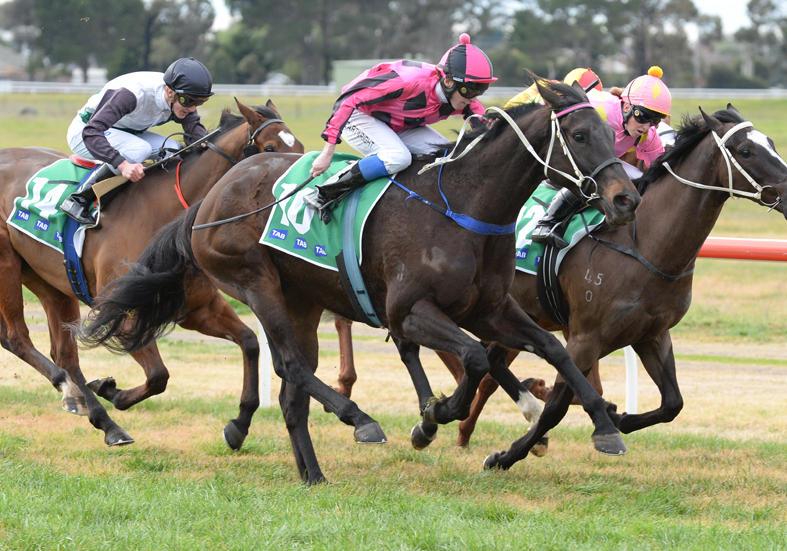 Part-owner Yvonne Hickenbotham was rendered speechless after Une Momento scored an upset, and long awaited, win at Werribee.
The rising five-year-old mare, having  just her fourth race start, defied a track bias coming from off the pace to land the TAB Werribee Cup is back in Spring 13th Nov Maiden Plate (1400m) on July 17.
Ridden by stable apprentice Josh Cartwright and having her first run since October, Une Momento raced three wide midfield before closing to within three lengths at the 400-metres and coasting up five-wide on the home turn.
Under the whip, she kept coming in the home straight and to the delight of bookmakers hit the line strongly to get up in the last stride at $31, paying $45.10 on the SuperTAB.
“I was absolutely speechless when she won,” said Yvonne who along with her fellow owners has been very patient with the daughter of Barely A Moment.
“It was just amazing.
“We have waited so long for this one – I call her Sleeping Beauty.
“She was very immature and has needed a lot of time.”
Yvonne has had a lifelong passion for racing, being the granddaughter of Walter Hickenbotham who trained four Melbourne Cup winners including the immortal champion Carbine.
She remembers picking out the Une Momento on her pedigree.
“The mare (My Prima Donna) had produced so many (six) winners (from six runners) I thought she was worth looking at,” Yvonne said.
Yvonne attended the 2010 William Inglis Melbourne Autumn Yearling Sale with Jamie Edwards and his wife Janet and Une Momento was bought for $15,000.
Yvonne and her close friend Hazel Hamilton own 30 percent of the promising mare who didn’t race until she turned four last August.
Her best of three runs in her first campaign was 2-1/2 length fourth at Kyneton.
“It was an amazing performance to win first up, Yvonne said.
“Of course I didn’t have a penny on her but I seldom bet anyway.”
Yvonne owned many horses with Meggs and Bruce Elkington and is hopeful that that Une Momento can be her best yet.
She rates city winners Petagina and Raging Inferno as the best she has raced while in more recent years with the Edwards-Elkington team she has had an interest in De Arias, Mossailey, Hot Spin, and King Manu.