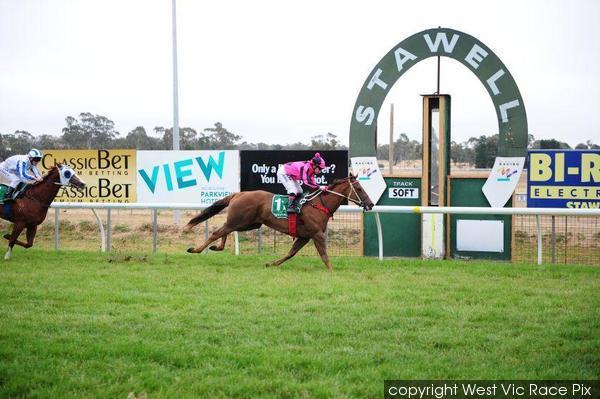 ATTRACTIVE filly Misspiel was a classic case of patience of paying off when she posted a memorable win for her owners at Stawell on Friday.

The win punctuated a long journey for Challon and his wife Patricia and Challon’s mother Van and her husband Des Gooding who co-owned Misspiel’s winning dam Fashion Passion.

Misspiel was the result of Fashion Passion’s third mating at stud after her half-sister by Purrealist died and a second covering missed with Purrealist.

Five-time winner Speilmeister, who was fourth in Apache Cat’s 2006 Group One Australian Guineas was a logical next choice of sire as he had not long retired and the Murdock’s had part-owned him.

However at stud he’s had only nine named foals from his first two crops including Misspiel who was small and slow maturing.

“She is really an advertisement for giving a horse time,” said Jamie Edwards.

“She had a couple of jump outs early on and she had a short, crappy action and really immature knees.

“We gave her heaps of time and the transformation has been amazing.

“You wouldn’t believe the improvement she has made in the last six months.

“She is a tough little filly and can really run.”

At Stawell Misspiel was entitled to get beaten with the tough run she’d had, but after jockey Dean Yendall cracked the whip at the 400 metres she laid her ears back, took the lead approaching the 200 metres and then sprinted clear the last 100 metres.

Notably her winning time was within a second of her much higher graded and seasoned stablemate Fourdays Of Mylife who gave Emsley Lodge a double at the Stawell meeting.

Against the odds Challon and his family had bred their first winner.

“It was a great thrill,” Challon said.

“Because she was quite small we were basically told not to bother with her but we went on and it has turned out well so far.”