Marcello’s Sonata on Song at Geelong 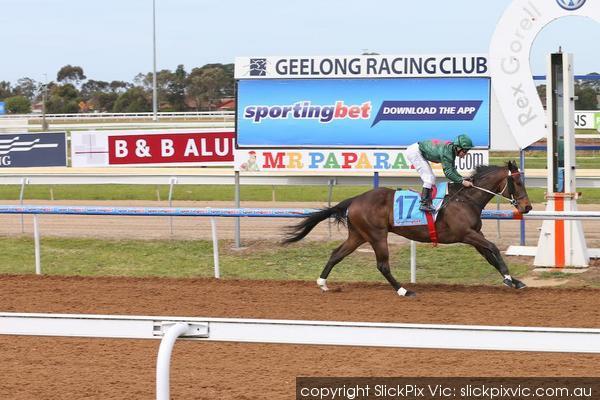 Marcello’s Sonata is another success story for the facilities at Emsley Lodge after defying vets and winning his maiden as a five-year-old.
Locally bred by Wayne Jennings, the son of Galileo was not expected to race after he badly bowed a tendon as young horse, but showed he had a bright future, leading all the way for a dominant 4-1/4 length win at Geelong on September 27.
The stable has been patient with the gelding and the Geelong City CC Season Launch Maiden Plate (1300m) was just his fourth race start.
“It really didn’t look good for him (Marcello’s Sonata) as a young horse,” said co-trainer Jamie Edwards.
Marcello's Sonata had stem cell therapy for his injured leg but original trainer Mark Kavanagh and his vets gave up hope that he would ever see a racetrack.
“After a year in the paddock I went to have a look at him and I was very confident he would hold up, especially with the facilities we have got at the farm,” Jamie said.
“They have really been a big bonus for a horse like him.”
Marcello’s Sonata had his leg scanned last October and in his first preparation late last year, he improved with each of his four jump outs before a summer break.
“We gave him his first prep as a five-year-old and he was as green as a two-year-old,” Jamie recalled.
“He came back into the stable in February and with experience he has learned how to race a bit better and is now looking like a nice horse with a future.”
Winning jockey Ryan Maloney said Marcello’s Sonata was still “quite raw” and would only get better.
“He is still trying to put it all together,” Maloney said.
“We had a plan to take no prisoners (at Geelong) because he was fit enough so I gave him a squeeze out of the gates… and really stoked him up down the hill.
“He was still half waiting for something to come and that’s why I kept riding him with the whip, but there is a lot of improvement in him and I think he will make a nice horse.”
Congratulations to Marcello’s Sonata connections he is raced by Michael Palmer, Euan Evans, Terry Kennedy, Jim Mann, Shane O'Brien,  Peter Sandars (who also raced the Dam Costalette), Rick and Julie Schoff, and Julie Shaw and is a great grand-son of former top mare Bow Mistress, who was trained by Bruce Elkington in the 1980s.
Among Bow Mistress’ best performances were wins in the Group Two Liston Stakes and Listed VRC Gallantic Hcp, while she was also Group One-placed VATC Oakleigh Plate and Group Two-placed in the VRC Linlithgow and VATC Memsie and MVRC Alister Clark Stakes.