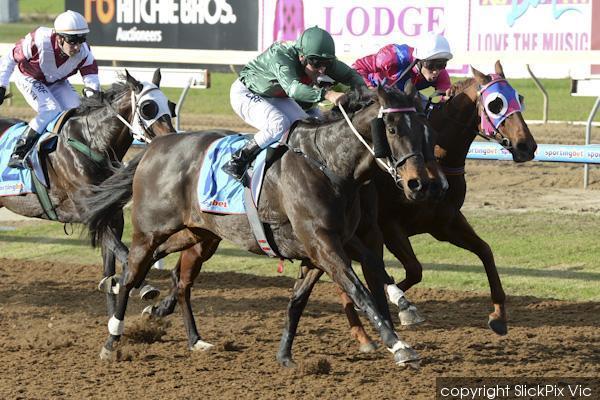 LIGHTLY raced Marcello's Sonata underlined his gift as a "fresh sprinter" when he defied an outside barrier to post his second win at Geelong.

The gelding raced off the rail throughout Tuesday's Rex Gorell Volkswagen BM64 Handicap (1200m) with jockey Ryan Maloney urging him forward three-wide on the home turn to make his winning run on the synthetic track.

Marcello's Sonata picked up four lengths from the 200 metres to hit the lead 50 metres out and coasted to the line for a soft 1/2 length victory over the fancied Platinum Citi and pacemaker Sound System.

The win highlighted the talent of the six-year-old who has raced just six times since bowing a tendon as a young horse in Mark Kavanagh's stable before he raced.

Emsley Lodge has been a great facility for his rehabilitation and he has always run well fresh, placing third at his debut and later, off a two month freshen up, won his maiden at Geelong in September last year.

"He seems to have thrown to his dam, a very fast Encosta De Lago mare (Costalette),'" co-trainer Jamie Edwards said.

"We tried to get him up over a little bit of ground last time in but that didn't work and he went flat very quickly.

"Even though he is by Galileo (the sire of Sertorius), he doesn't cope with the work of a middle distance horse so we gave him a long spell after his last campaign and we will keep him fresh for sprint races.

"He seems to have improved and it certainly looks like there are more wins ahead."