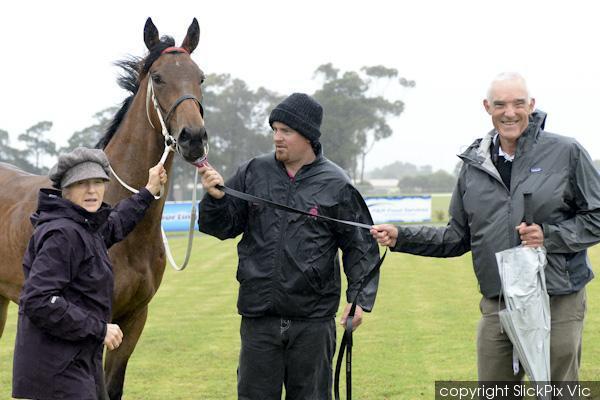 MIKE Palmer has had some great highlights as the owner of star galloper Sertorius but none matches the thrill he got from Macrobius' debut win at Geelong.

The victory was more than seven years in the making and the fruition of careful planning which made the reward ever so sweet.

"Macka” is the first horse Mike has bred and the celebratory embrace with his wife Beth in the grandstand after the gelding held on to win underlined the emotion and significance of the moment.

"This means more to me than any of Sertorius' wins," Mike said.

"A lot of time, effort, thinking and planning went into it."

The journey started in 2007 when Mike, after being a member of various racing syndicates, decided to go it alone and bought his first horse, Moorunda Lass for $57,500 at the Melbourne Premier Sale.

Mike always liked Montjeu, winner of the 1999 Prix De L'Arc De Triomphe and Moorunda Lass was his only progeny at the sale.

"I went and saw her and fell in love with her," Mike recalled.

Moorunda Lass won a Kyneton maiden and placed a twice at Moonee Valley, but Mike's intention was always to breed from her.

His passion for the Prix De L'Arc De Triomphe led to him mating her with 2007 Arc winner Dylan Thomas in her first two seasons at stud.

Macrobius was her first foal but there were doubts he would make the track.

"He was a dumpy little thing with short legs, and more round than anything," Mike said

In a move to try and help him grow and furnish Mike had Macrobius gelded before he turned two but it wasn't until six months ago that he started to really develop.

“I had reservations he would make it but when you look at their records, Dylan Thomas and Montjeu were at their best as four-year-olds."

Mike loves his history and just as Sertorius got his name from the past so does Macrobius, named after an early 5th century Roman historian.

Mike said he didn't have high expectations from Macrobius in Sunday’s Chris’s Body Builders Maiden Plate (1225m), but was hopeful that he would be run well given he has bred and owns three of his sisters.

"I have another three foals out of the mare and I thought if he is no good then I have got three duds coming," he said with a laugh.

Mike had identified that the Dylan Thomas progeny were not jump and run horses and needed time to find their feet to train on over more ground.

Co-trainer Jamie Edwards and apprentice Josh Cartwright have taught him to settle back off the pace and finish off in his trials and with that foundation Sunday's event couldn't have panned out better.

Ridden by Ryan Maloney, Macrobius landed fourth on the fence behind tear away leaders Central Station and Strajiri, and cruised within a length of them on the home turn.

The odds-on favourite Central Station led into the straight but Macrobius had him covered at the 200 metres before holding off a late challenge from $2.50 chance Avenue Of Glory.

The margin was a neck but there was anxious wait for an official result with a protest second against was first eventually dismissed.

"I would have been rapt if he had run 2nd or 3rd and been running on, but I was really chuffed he won over 1200 metres as I didn't expect that,” Mike said.

Mike said he gave Moorunda Lass a year off this season partly to assess the success of her progeny and he is now more excited than ever about the future.

Midnight In Moscow is a two-year-old Dylan Thomas filly while Macaria is a Henrythenavigator yearling filly and Moorunda Lass' recent foal a filly by 2003 Arc winner Dalakhani.

"Macrobius is still growing I think he going to finish up a nice horse, but the Dalakhani filly looks the best of the lot," Mike said.