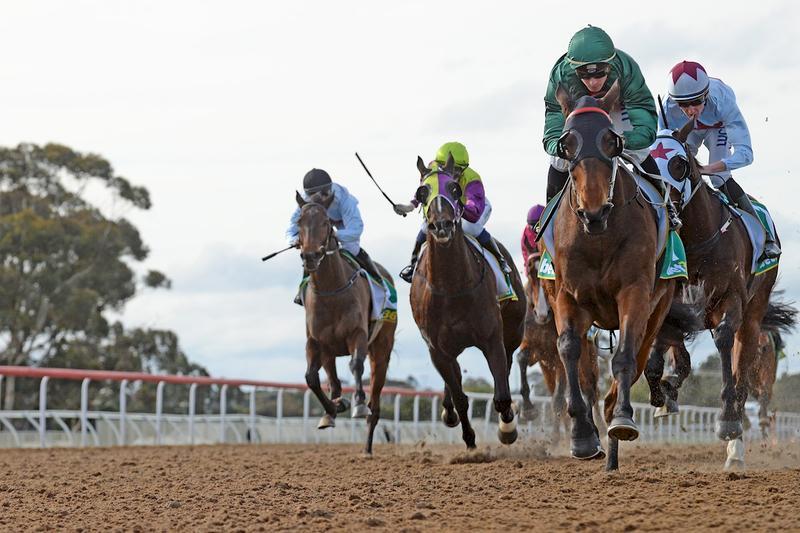 Consistent galloper Macrobius has won his first race since his making his debut 20 months ago.

The Dylan Thomas gelding defied his breeding when he scored over 1225 metres on turf at Geelong on December 7, 2014 and added a second win to his resume when he landed the Rex Gorell Family Group Handicap (2200m) on the Geelong Synthetic on Friday.

Ridden by Daniel Moor, Macrobius was given no peace in the lead but beat off the pestering Deliberate on the home turn, straightening up just over two lengths in front.

He still had 1.75 lengths to spare on the line, with Deliberate finishing second and another 1.5 lengths back to Dream Diamond.

With a 58 rating, Macrobius has been in great form racing out of his class, and last start finished second in the Synthetic Stayers BM78 Final (2220m) at Pakenham.

Owner Mike Palmer bred Macrobius from his winning Montjeu mare Moorunda Lass, and there are signs that he is getting better with age.

Trainer Jamie Edwards said the improvement maybe no coincidence as Dylan Thomas progeny are often seen at their best as five and six-year-olds in Europe.

“Macrobius has a heap of ability and has just been finding one better lately, but he might be starting to come into his own now,” Jamie said.

“Daniel Moor said it was the first time the horse really felt like he let down and extended.”

Moor, who was having his sixth ride on the gelding said the win may have been better than it looked.

“It was a strong, tough, on-pace speed into that wind today, but he was comfortable running those sort of sectionals whereas the others weren’t.

“He just kept building and improving and while he doesn’t have that dashing turn of foot he revved up nicely from the 600m.”

Macrobius has won two of his 21 starts but has been a bit unlucky with five seconds and four thirds.