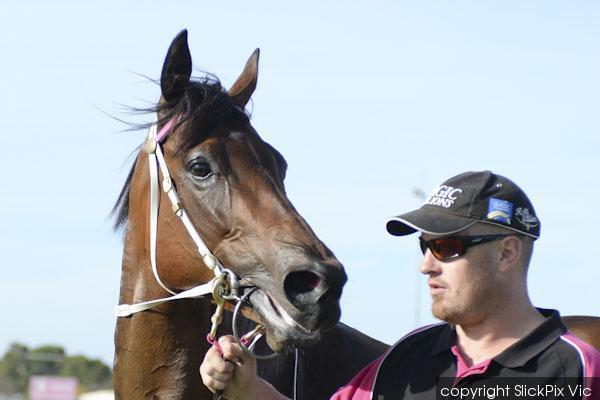 LORD Emsley has done it again.

The three-year-old, who made his winning debut at Camperdown just 18 days ago, gave older horses a thrashing when he successfully graduated to 0-64 class, leading all the way at Geelong on March 13.

The athletically built home-bred gelding, ridden by stable apprentice Josh Cartwright, jumped brilliantly from the gates and controlled the race with a length lead to the home turn.

Soon after straightening he put a space on his more seasoned opposition, racing home three lengths ahead of Cannon Man and Sweet Clementine to land The Park Hotel Showcase 0 – 64 Handicap (1130m).

Lord Emsley’s effort was even more impressive than his tenacious debut win at Camperdown, and he ran a smart time (1m7.09s).

Co-trainer Jamie Edwards said Lord Emsley had continued to improve and he’d pulled up so well from his Camperdown win that he could have raced the following week.

“I think he is a pretty good horse,” Jamie said.

“The good part of his Geelong win was that it was against the older horses and now he can go back to three-year-old grade at possibly a midweek city meeting and enjoy a three kilo claim with Josh on him.”

Lord Emsley was bred by Emsley Lodge partners Peter Sandars and Jim Mann who have been patient and allowed the gelding to mature into an “easy to train” galloper.

“He's quiet, sensible, bounces straight on the ‘bunny” and gives a good kick.”

Josh Cartwright said Lord Emsley was still learning, but he was catching on fast.

“He is very smooth and quick out of the gates and controls his races well.

“He doesn’t pull or come off the bridle. He just does it easily.

“When he quickened in the straight today he got a bit lost out in front, but towards the end he actually found the line quite nicely.”