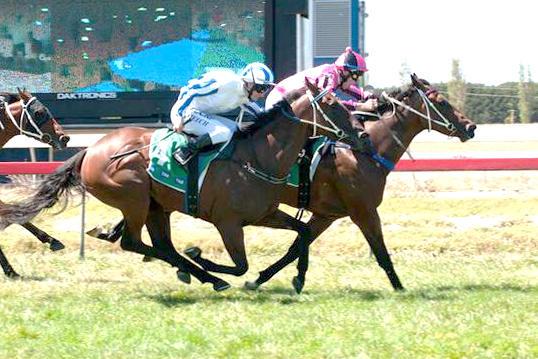 EMSLEY Lodge homebred Lord Emsley hinted that he may be up to city class after he scored a tenacious all the way debut win at Camperdown.

After encouraging recent trials, hopes were high that the three-year-old son of Churchill Downs would launch his career with a victory, and the way he won the Sungold Milk 3YO Maiden Plate (1000m) on February 22 impressed co-trainer Jamie Edwards.

“We went there reasonably confident, but I didn’t think he was that good,” Jamie said.

Ridden by stable apprentice Josh Cartwright, Lord Emsley jumped to the front and always appeared to be travelling well.

He came to the turn a length in front and beat off It’s A Thrilla at the 200 metres before answering a late charge from the Peter Moody-trained $2.60 favourite Altura to score in a photo finish.

Lord Emsley’s winning time of 57.74s was impressive, and equalled that of 0-64 sprint winner Day After Tomorrow, who won later in the day.

“He (Lord Emsley) ran up to his trials which is always good and he ran time which is very positive looking ahead,” Jamie said.

“He a natural speed horse, jumps and runs, and when you move on him he quickens so he’s a bit of a no brainer to ride.

“He might make a little Valley horse down the track”

Lord Emsley was the second debutant to win for Emsley Lodge in a week, with Froffy upsetting another Moody-trained hot favourite Kona Breeze when he scored at Terang in a 1000-metre 3YO maiden, also coincidently sponsored by Sungold Milk, on February 15.

Lord Emsley is an imposing looking gelding and is the second homebred winner, after Dashahoy, for two of Emsley Lodge’s co-owners Peter Sandars and Jim Mann.

Peter and Jim raced with some friends Lord Emsley’s dam Rose Line who won twice for the stable at Warrnambool in just eight starts. Her second foal is a Keep The Faith yearling.