Last To First Triumph For Inyangani 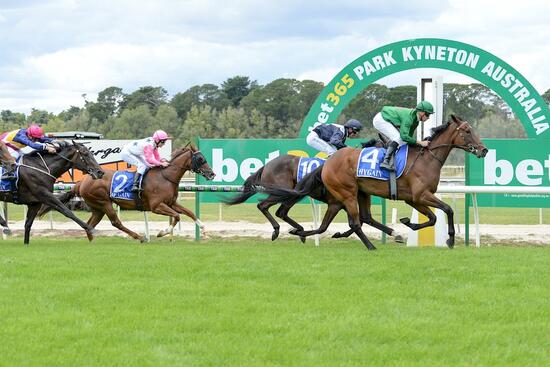 When a Saturday provincial race replay gets exposure on the racing.com Twitter feed then you know something special happened.

That’s what occurred this weekend after four-year-old mare Inyangani unwound a stunning finishing burst from last to win her maiden, easing up on the line, at Kyneton.

“Not many horses win from that position regardless of what grade of race,” trainer Jamie Edwards said.

“She got a long way back on a track that didn’t really suit her and to do what she did was outstanding.”

The margin did not do justice to the ease of the win with jockey Zac Spain, knowing she had the race won, not pushing her the last 50 metres.

Inyangani is the latest home-bred winner to owner Mike Palmer who sent his Encosta de Lago mare Inyanga to Sebring in the 2016 spring.

Inyangani cuts an imposing figure and has always promised a lot with couple of eye-catching second placings but has lacked consistency in her seven-start career so far.

“She can be hit and miss,” said Jamie referring to her previous start when she finished down the track at Warrnambool on January 9 after flashing home for second when resuming at Geelong on Boxing Day.

“We couldn’t really find a reason for her poor showing at Warrnambool but spacing her runs seems to work for her.”

“She’s a mare who will get further but we will aim to keep her fresh and see if she can put two of three good runs together.

“She’s not a jump and run type but lopes along out the back, conserving her energy for the last 600 metres and has a brilliant turn of foot which is exciting.”