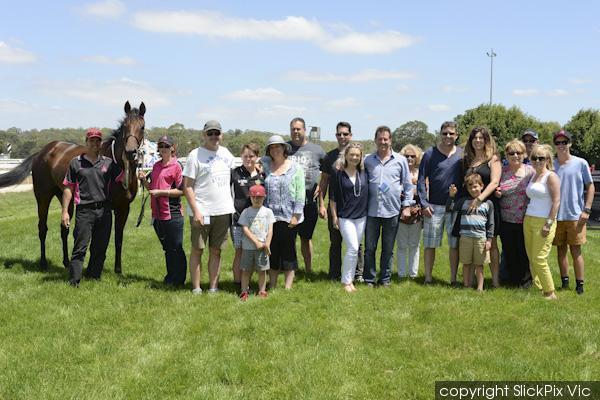 KAWABATA'S maiden win may only have been at Kilmore but for Brian and Sally Westcott and some of their partners who owned her ill fated mother Riva San, the day will long live in their memories.
Riva San’s first foal, Kawabata was orphaned in November 2011, just two months after she was born, and 14 months later Jamie Edwards bought her for $100,000 at the Gold Coast Magic Millions.
One of the most expensive buys ever for Emsley Lodge, Jamie loved the pedigree and she was the ideal type of horse he had targeted at the sales.
Outstanding stallion Encosta De Lago was her sire and Riva San was a rarity being the winner of the 2008 Queensland Derby and Oaks.
"She was exactly the type of horse we set out to buy at the sales" Jamie said.
"She's a horse with a pedigree that has a chance of training on as three-year-old and contesting the classic type races."
Kawabata was the product of a foal share arrangement with Coolmore Stud and after the premature death of Riva San from a foot abscess infection, Brian was resigned that his links with the family were lost forever.
"It was really, really devastating when Riva San died, then after Kawabata was sold at auction we thought we had lost the connection" Brian recalled.
"We were pretty disappointed how the whole thing turned out then Jamie contacted us."
Jamie had heard what had happened to Riva San and rang to give the Riva San syndicate members first option to get in to Kawabata.
"It was fantastic and most of us leapt at the chance," Brian said.
Steven Dick was one of them.
He had persuaded Brian into horse ownership in the late 1990s and together had raced Kawabata's grand-dam River Best and bred Riva San from her.
"A lot of those in the Riva San group including Michael and Linda Westcott, Brett Collings and Tim Lawson are still together which is good," Brian said.
He said Kawabata, whose stable name is Riva, bears an uncanny resemblance to Riva San and like her mother has a terrific temperament.
"Riva San was a beautiful horse and Kawabata is just like her and loves being around people," Brian said.
Kawabata always promised much and after a solid debut just behind the placegetters over 1300 metres at Cranbourne jumped up to 1612 metres at Kilmore where she took on the older horses in Sunday's open age and sex in the Stride Events Maiden Plate.
Fancied in betting at $4.20 and ridden by Reece Wheeler she was last early, much the same way Riva San used to race, and improved to fifth on the rails in the middle stages.
On a loose rein third last on the home turn and under hard riding she ground away without much impression until the last 100 metres when she slipped into another gear and powered home for a three-quarter length win.
"It is amazing that it was just a maiden at Kilmore and we are still talking about it," said Brian who was trackside to see the momentous win.
"I reckon we've watched the replay about 40 times."
While Riva San gave Brian some great memories, Kawabata's win was stacked with emotion and he rated it better than any of Riva San's victories.
"It was probably a better feeling because of what happened to Riva San," Brian said.
"It was fantastic to see her win – really exciting – and she looks like she has got a bit of future."
Jamie said several good stable clients Guy Lamperd, Tony & Sue Egan, Peter Sandars, Jim Mann,  Meredith O’Callaghan and Linda Gilmour are also partners in Kawabata and are eager to see how the filly measures up as her races get tougher.
"To win her second start over a mile against older horses is a great achievement," Jamie said.
"It’s all ahead of her now.
“She will progress to better quality three-year-old fillies staying races, and if she is any good it opens up to all the cups in the spring for her," he said.
Congratulations to all her excited and patient owners group mentioned including first time owners Brett Jaques, Mary Laupert and the syndicates “Riva Junior”  (Mgr Steve Dick), “Dad’s Getaway”  (Mgr Brett Collings) and “Drawn The Carpark”  (Mgr Tom King).