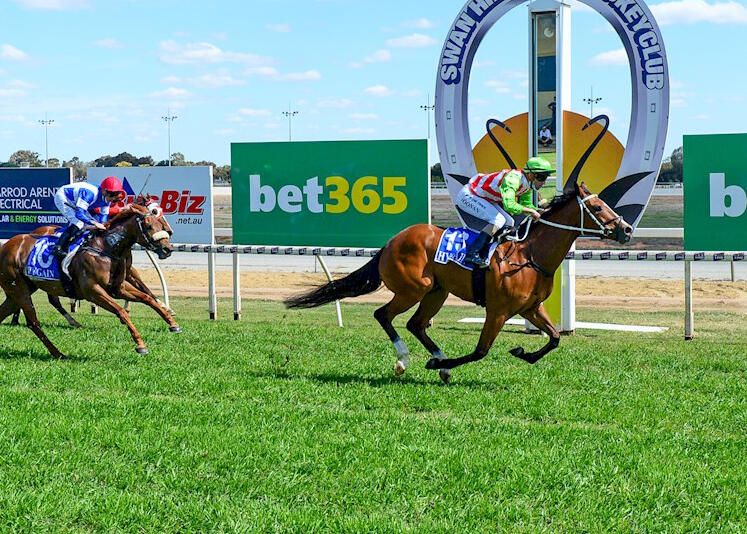 The More Than Ready four-year-old has always shown good ability but many times she has challenged the stable which made the victory in the Jarrod Arentz Electrical & Solar Solutions Maiden (975m) even sweeter.

“She’s as difficult a horse to train as you would ever get,” said trainer Jamie Edwards who has literally chased her on the track on more than one occasion.

“She has been very frustrating, and she can be really rebellious,” Jamie said.

Her jockeys have also had their own difficulties with her over-racing, throwing her head around, and two starts she even copped a warning for her racing manners after her first-up 10th at Wangaratta.

She also finished 10th at Swan Hill on September 10 but the stable knew she was capable of much better.

“Her form was horrible, but she hasn’t been going nearly as badly in training,” Jamie said.

“She’s been galloping up great and is in very good nick, so a big improvement wasn’t surprise.”

Halobel, who has been unplaced in her previous six starts, firmed from $41 to $31 and won like a sure thing.

From her wide barrier, jockey Jake Noonan let her find her feet five lengths off the lead and she improved three-wide from the 600m.

With the fast pace she was much more tractable and quickly joined in at the 200 metres before dashing away over the final 100 metres to score by two lengths from Miss Luminari ($16) and Spurge $12).

“The distance suited, and tempo of the race was the key as it allowed her to finish off like we thought she could,” Jamie said.

“It’s particularly satisfying when you see her win like that win after all the work that everyone has put into her,” Jamie said.

“The owners have been very understanding and it is great that she has got the job done for them.”