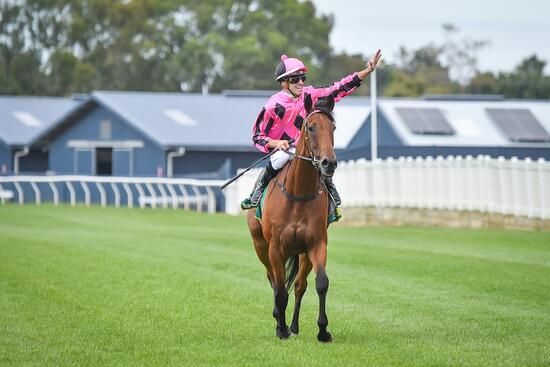 Jockey Jordan Childs devised a race plan on the way to barrier and successfully deployed front running tactics on Hailey’s Diva at Geelong on Thursday.

For the first time in her career the five-year-old mare took up the role of pacemaker and refused to be beaten in the Thompson’s Creek Thoroughbreds Maiden Plate (2424m).

After having a cosy run in front, the pressure came on entering the straight with Hailey’s Diva ($11) locked in a stride for stride battle over the last 250 metres with There For You ($9.50).

Jordan said Hailey’s Diva was headed at one stage but fought back tenaciously under pressure with the judge finding the barest of margins in favour of the daughter of Swiss Ace.

“The other horse got about a neck on us, but she (Hailey’s Diva) was able to tough it out and come back and win,” Jordan said.

Hailey’s Diva’s was having her eighth race start and a Tatura placing in November suggested a win was very close before a confidence-sapping showing at Mornington last start.

“The question mark was certainly there and owner Greg Perry to his credit decided to give her one more run and she has put her head in front today,” trainer Jamie Edwards.

Jordan said he planned to lead on Hailey’s Diva after she proved a handful for him pre-race.

“She was giving me a bit of a hard time going around to the gates so I just thought that if she jumped well I would let her flow (forward) and get into a nice rhythm and it paid dividends,” Jordan said.

Despite being by an Oakleigh Plate winner from multi-city winning sprinter Diamond Hailey, Hailey’s Diva has always shaped as a promising stayer.

“It looked like last preparation she was going to make it, then she got injured, Jamie said.

“We will take the win today and hopefully she can go on from here.