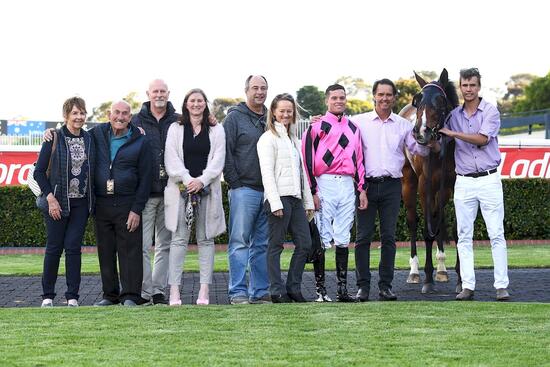 After posting seconds at her two previous starts at Kyneton and Sandown, the So You Think four-year-old proved too classy in Wednesday’s Ladbrokes Blended Bets Hcp (1300m).

Concerned that Little Miss Gutsaa wasn’t finishing her races off, trainer Jamie Edwards replaced blinkers with visors and instructed jockey Zac Spain to ride her patiently on the speed.

“She was sort of getting them easily in her races but unable to put them away so we thought holding her up for a late run with visors on her so she can see the other horses coming could be the answer,” Jamie said.

“I wanted Zac to wait as long as possible to win the race and he rode her perfectly.

“I just liked the way when she got to the front she kicked strongly.”

Zac said he was little concerned when Little Miss Gutsaa ($11) half dwelt at the start, but she soon mustered to settle outside the leader Orlando Grove.

Approaching the 200 metres, Little Miss Gutsaa hit the front earlier than expected and with Circle of Magic in hot pursuit.

“It (Circle of Magic) came at us a but earlier than I would have like but I still felt as though I had plenty there,” Zac said.

“When I pushed the button, she picked up well underneath me and was tough right through the line.”

Zac said the visors were a “terrific gear change” as she didn’t wait for the other horses like she tended to do with the fully enclosed blinkers.

Jamie said it was an important win for Little Miss Gutsaa, declaring her a genuine city class horse after beating Americain Angel ($2.90) and Circle of Magic by a length.

She is owned by Gary and Marie Allen, Barry and Shirley Reynolds, Trevor Reynolds, and Catie Hocking.

“Full credit to the owners who have given the time she has needed,” Jamie said.

“They bought her as a yearling and now they have a city winning So You Think mare,” Jamie said.

Jamie said her next target could be up the 1200 metre straight at Flemington in a 70-class race on December 18.