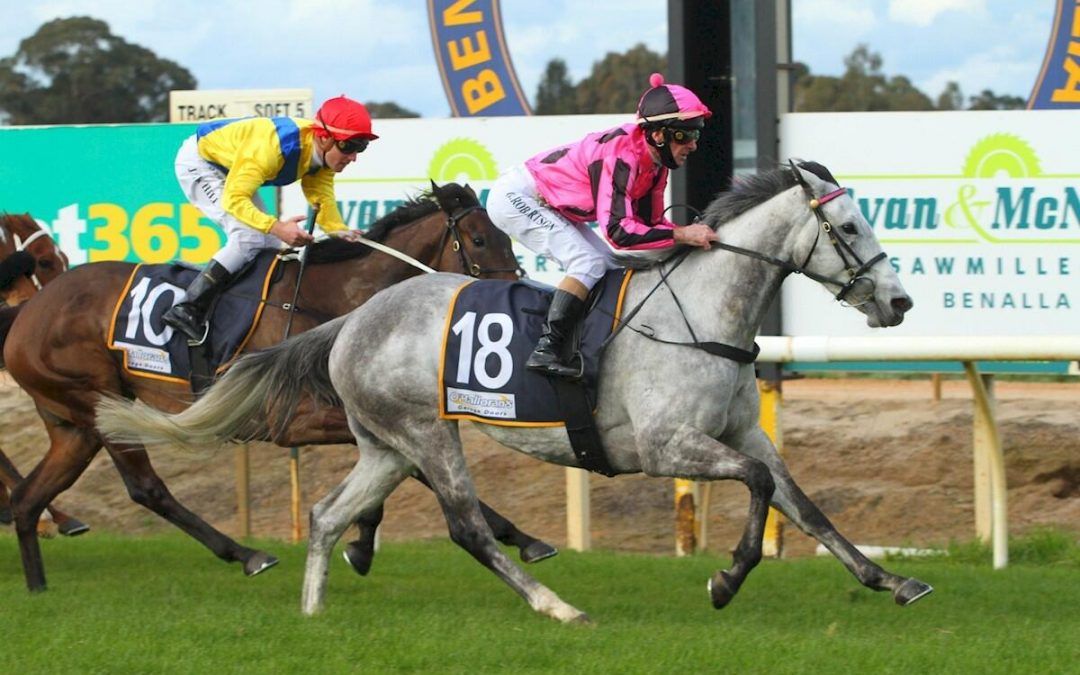 Luck finally broke Grandma Gail’s way when she posted an overdue win after a host of race morning scratchings gave her a start as the sixth emergency at Benalla on Monday.

With the field limited to 12 runners, the grey mare carried number 18 saddlecloth to victory in the DKM Builders BM58 Hcp (1106m).

Jockey Craig Robertson was confident she could win after riding her trackwork at Emsley Lodge last Wednesday, but his heart sank when he learned that she was unlikely to get a run as an emergency.

“After I worked her last week, I thought she would be hard to beat wherever she goes and that (Benalla) was our race,” Robbo said.

“She hasn’t been having a lot of luck lately, but she got into the field and won which was well deserved for the team.”

Grandma Gail settled three-wide off midfield but made ground quickened brilliantly halfway up the straight, hitting the front near the 100 metres and scoring a three-quarter length win over Enigma and Raysim.

Assistant trainer James Edwards oversaw the mare at Benalla and said the win was a welcome change of fortune for lightly raced six-year-old.

“Early on in her preparation nothing went her way,” James said.

“She got a foot abscess, was scratched at the gates and even last start got squeezed out at the start Wodonga and probably should have won (when a fast finishing fourth).

“We have to give credit to the owners who have been really persistent weathering the disappointments, and hopefully she can go on for them now.”

James said it was particularly pleasing to see Craig Robertson have success with Emsley Lodge as a reward for the work he has been doing riding trackwork and in trials.

Grandma Gail has only raced 11 times and her Benalla victory was her second win after scoring at Warrnambool in October last year when having only her third race start.

James said the daughter of Glass Harmonium had found her niche in races around 1100 metres.

“Over 1400 metres she wants to get it over and done with and the riders can’t hold her but at 1100m she can let the speed go and be good late.”