“Freshwater Creek Flyer” makes it four in a row 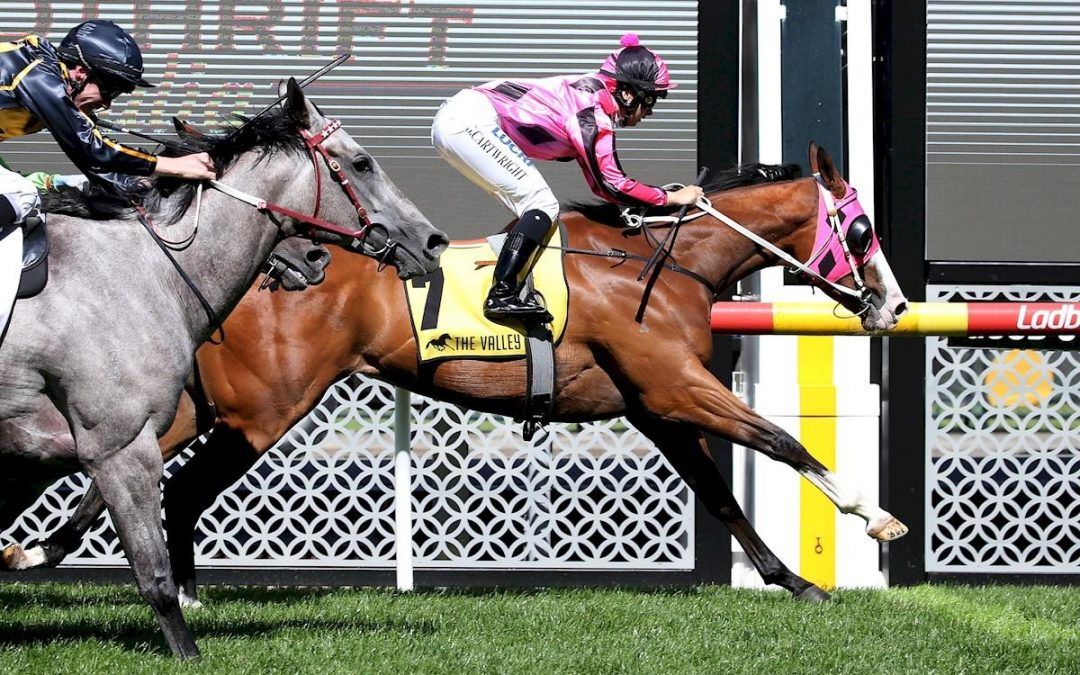 Fill The Flute was labelled the “Freshwater Creek Flyer” after posting her fourth win a row with another dashing performance at Moonee Valley on Saturday.

The four-year-old mare showed lightning speed from the barrier to cross two lengths clear of the field and was never headed in the Spendthrift Australia Hcp (1000m).

Race caller Matthew Hill dubbed the speedy mare the Freshwater Creek Flyer as she crossed the line nearly a length ahead of stakes-performed Grey Shadow and the in-form Essence of Terror.

Trainer Jamie Edwards said the star was still rising for Fill The Flute who is unbeaten in four runs this campaign and has won five of her nine starts.

“It was decent class rise today to BM84 against mares and she keeps taking the next step.”

Fill the Flute opened her campaign with a BM58 on victory on the synthetic at Geelong on September 7 before an easy win at Morphettville (BM64) on September 22.

She had a short let-up after winning at Moonee Valley (Mares BM70) on October 5 and a soft trial at Geelong last Wednesday had her primed for her biggest test.

Former Emsley Lodge apprentice Georgie Cartwright has partnered Fill The Flute to her last three wins and rated her perfectly in the lead before kicking her 1-1/2 lengths clear early in the home straight.

Jamie said Georgie’s three-kilo claim gave him confidence that Fill The Flute could win as she was getting up to 7kg off the top weights.

“She is pretty push button, very fast, and we just wanted to go to the front and make them chase us,” Jamie said.

Fill The Flute is a half-sister to VRC Derby winner Extra Brut and James Edwards can take the credit for picking her out as a weanling for $7000.

Jamie said: “I gave James $10,000 to go to the sales and pick out a horse as a paddock companion for another weanling filly and he brought home this one,” Jamie said.

Fill the Flute is the 15th winner for Emsley Lodge this season and capped a big couple of days for the stable which celebrated a double with Prince Ziggy and Macrobius at Wodonga on Friday.