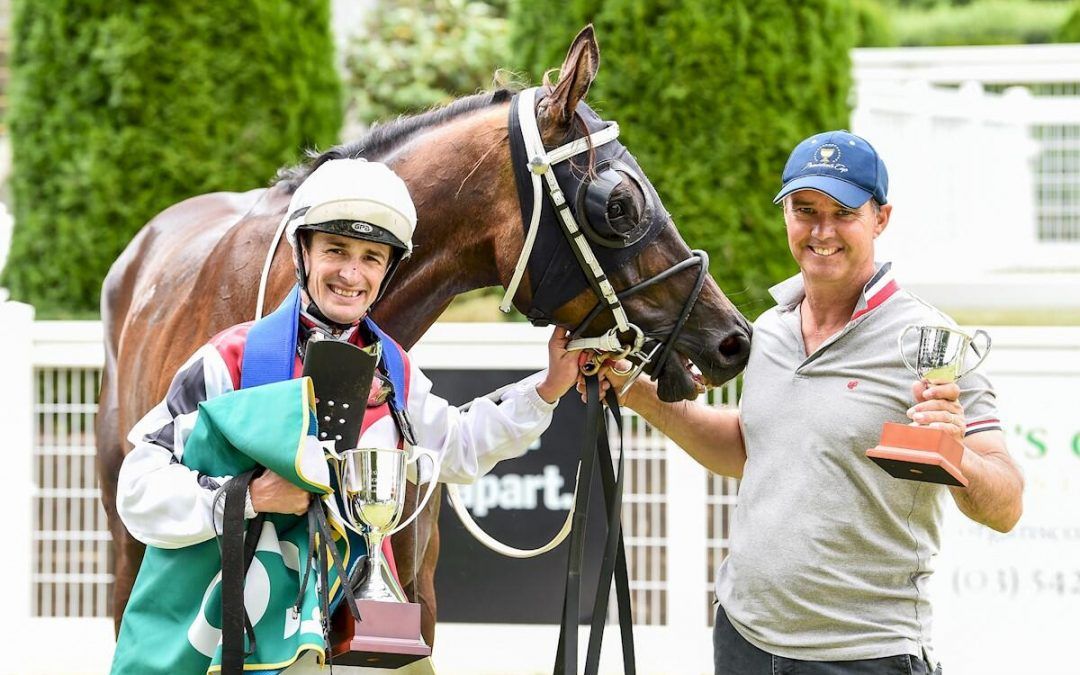 Jason Benbow kept his unbeaten record intact on I Am The Fox when he landed the Bet635 Hanging Rock Cup on the gelding at Kyneton on Australia Day.

Jason won on the seven-year-old three starts ago and was back in the saddle for the second time after trainer Jamie Edwards made a late decision to run the galloper.

“I had no intention of running him but his work was so good on Saturday morning we decided to take on the stronger race and get a line on where he sits going forward,” Jamie said.

“We were hoping that he would earn some prizemoney and then we could look at an easier race over 2000 metres at Warrnambool in a couple of weeks but he exceeded our expectations.

“He put them away early and now the horse is a Cup winner which is great.”

After settling seven lengths off the lead, I Am The Fox circled the field from the 800 metres and hit the front on I Am The Fox ($16) wideout on the track on the home turn.

Despite the tough run and his lead being whittled back in the closing stages, Jamie was impressed with the win of the son of Foxwedge who is owned by Neil and Michelle Henson and Mark and Nadia Rawson.

“He’s going pretty good and hopefully the handicapper doesn’t get hold of him now.”

Earlier this month I Am the Fox won first-up over 1400m in BM58 company but was beaten more than three lengths in a BM64 at Wangaratta last start.

Jamie said I Am The Fox was disadvantaged in the Hanging Rock Cup carrying 2kg more than his 63-rating under the weight scale against such horses as unplaced favourite and 78-rater Tough Vic.

“He’s has a very good turn of foot and to win two of three with him so far this campaign is pretty exciting,” Jamie said.