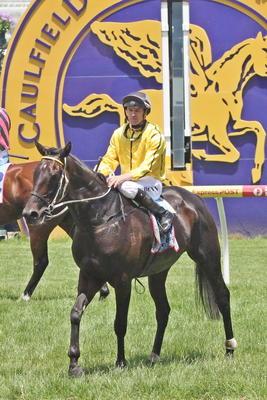 GEELONG galloper De Arias is getting close to ending an 18-month drought, according to co-trainer Jamie Edwards.

Edwards, who co-trains De Arias with Bruce Elkington, said big weights had affected the small galloper since he won the $70,000 Country Cup (2040m) at Moonee Valley in June last year.

"He's only a pony, 15.1 hands, and he was getting 58 and 59kg for about a year and running lots of placings," Edwards said.
Have your say on the feedback form below

"But when he gets down in the weights, like in races with bigger prizemoney, he's gone all right," Edwards said.

"But at his previous start he ran sixth at Moonee Valley at a night meeting when Dwayne Dunn rode him and Dwayne said he had no luck at all and he should have either won or run second," Edwards said.

"He went to the line hard held and it was really on a track gallop so we backed him up quickly and ran him in the Kyneton Cup."

"Boss is the right jockey for De Arias, he's not a horse that cops a flogging and he needs to have clear running. There's not a jockey better than Boss in getting clear running, he tends to find luck," Edwards said.

De Arias was best suited when down in the weights and was racing at 2000m with a quick tempo, he said.

"When the speed is on he can finish off and run quick sectionals," Edwards said.

The Edwards-Elkington stable scored with Babyhawk at Stawell yesterday.