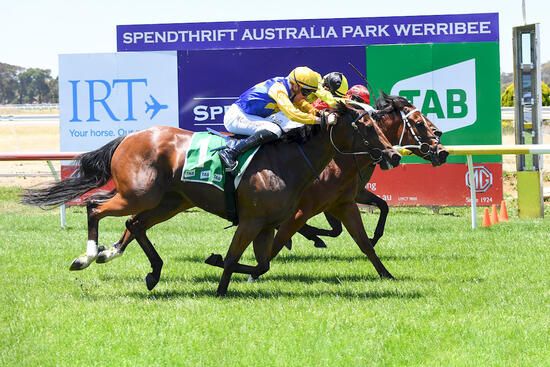 Attacked from both sides in a blanket finish, Croc Lurkin’ snapped up his maiden victory when resuming at Werribee on Thursday.

Sandwiched between the placegetters the four-year-old poked his head out to defy a betting drift ($5.50) and hold off the fast-finishing Akka’s Meteor ($9) by a nose with odds-on favourite Vaettir ($1.85) a head away third in the Evergreen Turf Maiden (1008m).

Croc Lurkin’ had recently trialled up well but his owners Glen and Judy Sinclair had to wait a couple of extra 10 days before he raced after he was kicked by another horse at the barriers and was a late scratching at Terang on December 20.

“He was a bit stiff and sore after getting kicked so I was pleased they scratched him, but he recovered well and this week galloped up like a rocket, so we were expecting him to be hard to beat,” trainer Jamie Edwards said.

“He’s really come on and I think he’s in for a ripping campaign.”

Jamie credited said Emsley Lodge track rider Nigel Brown with getting Croc Lurkin’ to settle better in his trackwork which had transferred across to race day.

“He showed us a fair bit last time in and the way he finished off today was terrific to see,” Jamie said.

Jockey Jamie Mott who had watched Croc Lurkin’s recent trial wins, opted to take a sit one out and one back when the leaders fired up a hot pace.

“I thought we might lead or sit outside the leader but there were a couple with more speed today,” Jamie Mott said.

“He wanted to get up on the chewy a little bit when I did take a sit, but when I went for him he was really in for the fight.”