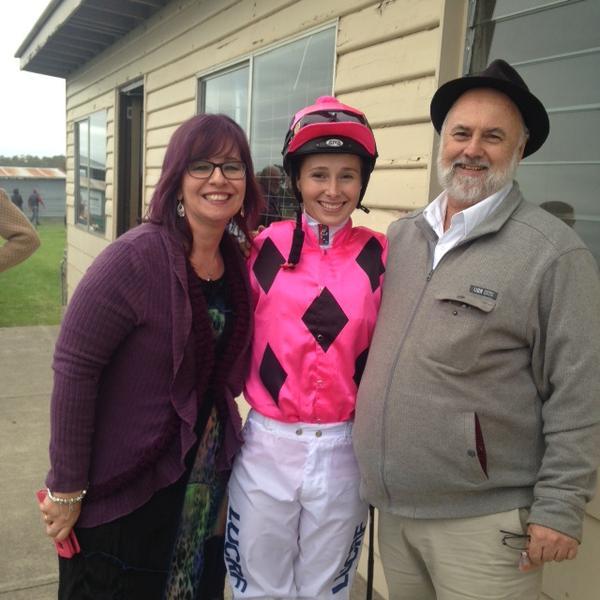 Consiello provided the thrill of a lifetime for part-owners Sandy Adler and her father Steve Brown when they saw the five-year-old win at Stony Creek on Tuesday.

Sandy and Steve have been partners in the Niello gelding for three years and they got the timing right when they made a 1750 km the trek south to see the horse for the first time.

“It was very exciting, just awesome,” said Sandy, who lives in the coastal town of Kingscliff, near Tweed Heads in northern New South Wales.

Stable apprentice Georgie Cartwright posted her seventh career win and her second for the stable on Consiello, who raced on the pace all the way.

After being three-wide going out of the straight, Georgie got him to settle second, a length behind the leader.

With challengers coming thick and fast, Consiello was in a line of four near the home turn but soon after straightening up he had the race in his keeping, taking the lead approaching the 250 metres and dashing clear to 1-1/4 length victory over Trinidadian in the Meeniyan Hotel 0-58 Hcp (2100m).

Trainer Jamie Edwards said he had trained Consiello as a stayer this campaign and it had paid off at his first start beyond 1720 metres.

“The whole preparation has been about getting him to settle and run the trip, and it was great that Sandy and Steve were there to see the win,” Jamie said.

Sandy, whose husband Kurt is also among the group of owners, said the family had bought into Consiello after Steve, while patting Sertorius at the races one day, got talking to Jamie about racehorse ownership.

“Consiello is our first racehorse and we are just so proud of him,” Sandy said.

“We have been wanting to meet him for three years but circumstances hadn’t allowed us to do that, but finally we decided to come down.

“It didn’t matter whether we saw him run or not, but Jamie managed to find a race for him and it was like something out of a story book seeing him win.

“I was right there on the finish line cheering him. It was absolutely amazing.”

“He’d run a couple of recent thirds and we definitely thought this could happen and it did.”

Two of Sandy’s three daughters were also at Stony Creek for the unforgettable experience.

“There’s nothing like seeing your horse win,” Sandy said.

“But if he had finished last I still would have loved him just the same. He is a beautiful horse.”

Consiello has won three of his 16 starts, including first-up this campaign at Yarra Valley over 1200 metres on December 28.