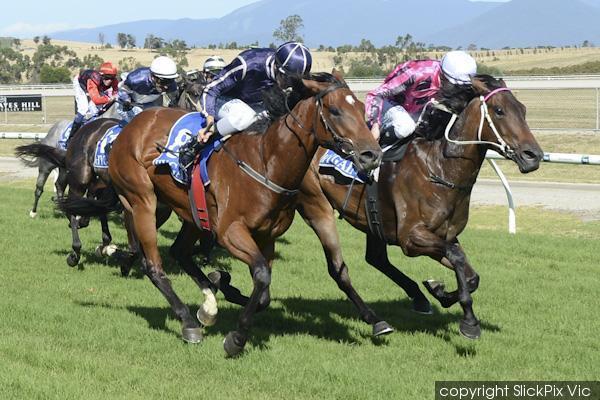 “He’s no good.”
They are three words no racehorse owner or trainer wants to hear from a jockey but that was the blunt assessment Noel Callow gave the connections of Consiello seven months ago.
His brutal appraisal came after he had just finished ninth of 12 runners on Consiello at Geelong in May and he had also trailed the field home on him at Mornington three weeks earlier.
Trainer Jamie Edwards conceded he had his doubts that the son Niello would regain the promising form he had shown early in his career but his owners retained a belief.
“We thought he was finished,” Jamie recalled.
“He showed a fair bit of promise early, but he got a bad foot problem and he just didn’t come back.
“He was racing terribly, over-racing badly, and thought it was over for him.”
Loyal Queensland owner Sandy Adler was very candid in her response to finding a new home for her horse "NO WAY! We are in this for the long haul and won't give up on him just because he's not feeling 100%…he's our boy and we're sticking by him". So where many owners would have cut their losses and run, Consiello was given another chance and his connections decided to give him a long spell in the hope that he would improve.
“It is a credit to all the owners, nothing to do with me,” Jamie said.
“They gave him plenty of time when most owners would have moved him on.”
That faith was rewarded on Monday when Consiello made a stunning return to the track, unwinding a barnstorming finish to WIN albeit declared a dead-heat in the ‘Robot Building Supplies’ 0-58 Hcp 1200m at Yarra Valley.
Unwanted in the betting at $31, Consiello drew awkwardly in barrier five on a track which favoured horses out wide, but Daniel Moor could not have ridden him better.
“The only instructions were to ride him quiet and try and get to the outside if you can, and he did that perfectly,” Jamie said.
Consiello was six-wide into the straight but quickly joined the leaders and after a two-horse war over the last 100 metres, he shared the honours with Dutch Courage.
Initially, Jamie thought Consiello might be an on-pace miler but this campaign has trained him to be a come-from-behind sprinter.
“I think he is a nice 1200-metre horse that you ride back and get home late on,” Jamie said.
Consiello, who won his race debut at Geelong in May 2014, has now won twice in 10 starts.
Jamie said Consiello had justified their faith in him.
“As one of the part-owners of the Bald & the Beautiful syndicate Matt Maiden, said, “they would have been disappointed if Consiello had been given a good long spell and then come back and improved under someone else’s name.'”
Now the owners can look forward with plenty of optimism, pleased that they gave Consiello another chance.

CONGRATULATIONS to all his winning and loyal connections!