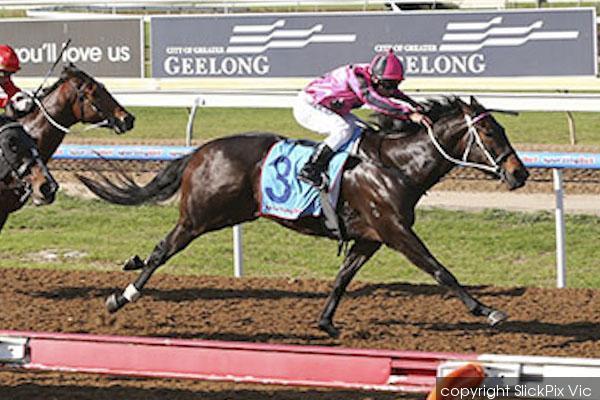 Emsley Lodge is building an imposing strike rate with its first starters after three-year-old Consiello became the third debutant to win for the stable this year.

The son of Niello was pressured from start to finish but answered every challenge when he beat Oneeyed Undertaker by a long neck in the Eddy Elias Maiden Plate (1300m) at Geelong on May 23.

An inexpensive purchase, Consiello is the third winner for his dual city winning dam Conscription, costing just $8000 at the 2012 Gold Coast Horses in Training Sale.

"We bought him on type," said co-trainer Jamie Edwards.

"We were looking for staying three-year-old types and he was the right sort of horse."

Jamie commended Consiello's first time owners who had been patient and had given the gelding the extra time he needed before making his race debut.

"To the owners' credit they gave him time and along the way we have sorted out couple of little barrier issues with the horse," Jamie said.

Sandy Adler, Kurt Adler, Steve Brown, Rob Heterick, Chree and Paul Hingston, and Chris Symon all experienced the thrill of their first winner. while Jamie's wife Janet was also a partner in the gelding.

Jamie said Consiello had shown ability in his trials and he was confident he would acquit himself well on debut after he finished second to the well performed seasoned galloper Zachary Quack in a recent barrier trial at Geelong.

Despite the pleasing trial form Consiello started at $8 and ridden by Ryan Maloney went forward and crossed from barrier eight.

He shared the lead with Beckazar from the 800 metres, before beating him off and answering another challenge from Kwanza at the 200 metres and holding off three late comers in a driving finish.

Consiello is the first in a band of horses about to hit the track for Emsley Lodge in the coming weeks.

Jamie said the stable had about 18 horses ready to trial and many of them would be having their first start for the stable towards the end of the season.

"We have had 17 runners in four months but we have a very busy period ahead," Jamie said.