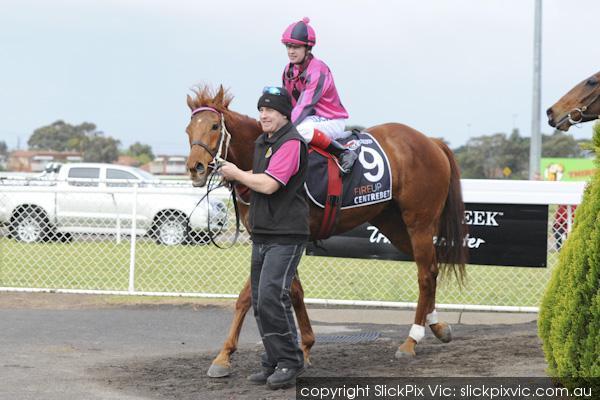 Stable plans came off when Viper Room posted the biggest win of his career in the  BC3 Thoroughbreds 2013 Winter Challenge Synthetic Stayers Series Final at Geelong.
In-form stayers Bombalatomba ($2) and Jimmy’s Better ($4.60) were expected to fight out the 2200-metre feature on August 23, but they were no match for Viper Room ($13) who was given the run of the race by jockey Dean Yendall.
Yendall had the seven-year-old perfectly placed third on the rails most of the way and when Musee Market took off and made the race into a sprint home over the last 800m metres the backmarkers had no chance.
Viper Room straightened up nearly three lengths off the lead but chased down Musee Market, getting up on the line to score by a nose.
“He took forever to get there, but it was a good effort,” Yendall said.
“At the furlong I thought he was going to run a nice second, but the last 50 metres he was pulling a bit of ground off the leader and he got there. It was brilliant.”
Jamie Edwards said the stable was always hopeful of winning the 0-78 class race despite Viper Room jumping from 0-62 and BM64 events.
“We set Viper Room for the series and he deserved his place in the field after finishing second and third in heats,” Jamie said.
“In the final he landed in a beautiful spot, running third on the fence, which was exactly where we wanted him to be in the run.
“There was no genuine speed early and that was always going to make it hard for the backmarkers with the favourites getting a long way out of their ground.”
Viper Room’s win was good improvement.
He was beaten nearly three lengths when third to Jimmy’s Better and Musee Market in a 2100-metre series heat on August 9, while Group One performer, Bombalatomba stormed home to win in emphatic fashion his last two starts at Geelong over 1900 and 2000 metres.
Bomblatomba finished eighth of 10 runners in the Synthetic Stayers Final, beaten 7-1/2 lengths while Jimmy’s Better was beaten 4.6 lengths into fifth place.
Viper Room is part-owned by Jamie’s wife Janet and her parents Ron and Marg Tatti.
He was bought as an “on-sell project” but wasn’t fast enough to convince any potential owners to take him on.
“We were left with him but he has been an honest horse and has more than paid his way,” Jamie said.
The Synthetic Stayers Final was Viper Room’s sixth win in 45 starts and the $30,000 first prize took his earnings to $88,150.
“He’s matured now,” quipped Jamie after the win.
Viper Room’s next assignment is likely to be a BM70 Country Showcase race over 2400 metres at Bendigo on September 8.