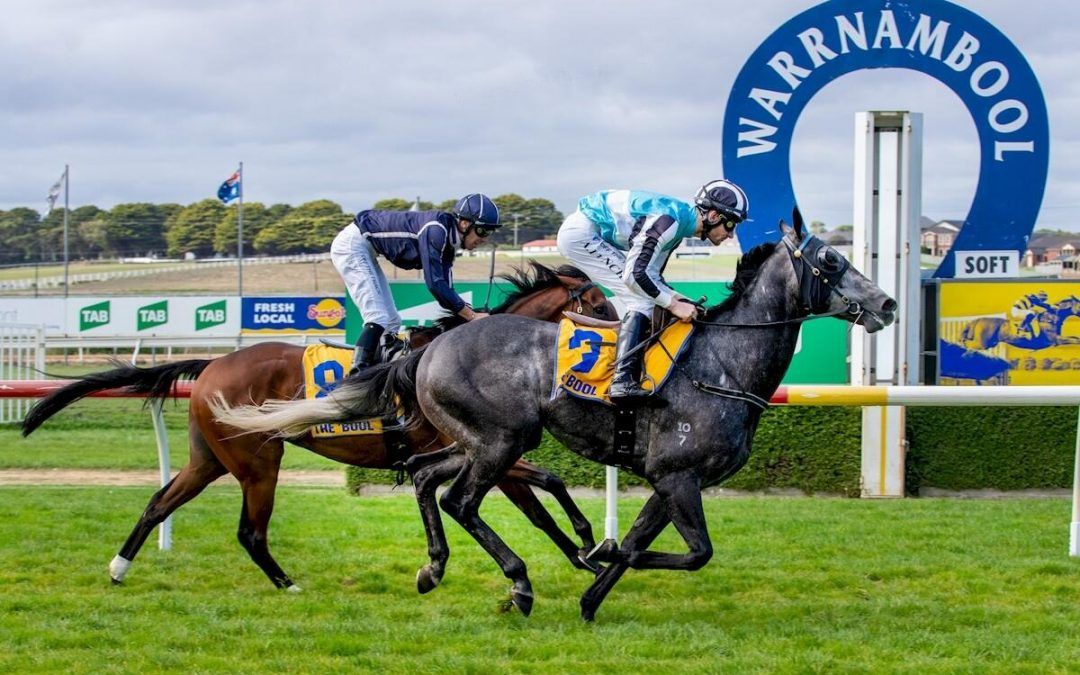 Frustrating galloper Deploy and Destroy stormed home from last for a long overdue maiden win at Warrnambool on Friday.

The Smart Missile gelding has become infamous for his tardy starts and again walked out of the gates before unleashing turbo-charged finish to land the Whalers Hotel Maiden Highweight Plate (1700m) .

Jockey Arron Lynch said he was aware of Deploy and Destroy’s barrier antics but still couldn’t get him out of the gates the rest of the field.

“You try and rock them back and forth so they don’t plant their feet but he’s got all the tricks,” Arron said.

“I gave him a bit of squeeze to get him out of the gates but it made no difference.”

before making his run.

“It was the charge of the light brigade for the first half of the race and he just had a nice easy run behind them,” Aaron said.

Deploy and Destroy ($11) was held up on the home turn and early in the straight but once in clear air he quickly had them covered.

Carrying a hefty 69.5kg, the grey beat first starter and favourite Mathew ($3.10) by a half-length with Weightman ($5) another three lengths away third.

Emsley Lodge together with long standing clients Aaron and Debbie Kingshott and friends purchased Deploy and Destroy at the 2019 Inglis Melbourne Yearling Sale and they have been patient waiting for the gelding’s success in the Kingshott’s #raceturquoiseblackandwhite silks at his 13th race start.

Trainer Jamie Edwards said Deploy and Destroy had shown a bit of X-factor with his stunning turn of foot in some early trials but his barrier manners had let him down.

“We thought we would have won a race before now,” Jamie said.

“We have done a lot of work with him trying to get his jump with the field but because he is slow out he has always been getting back a long way and flying home.

“The 1700m was ideal for him today and he was impressive the way he rounded them up and was strong through the line.”

“It wasn’t a strong field but hopefully it can give him some confidence and train on to better things from here.”