Bright future on the cards for "Gutsaa" 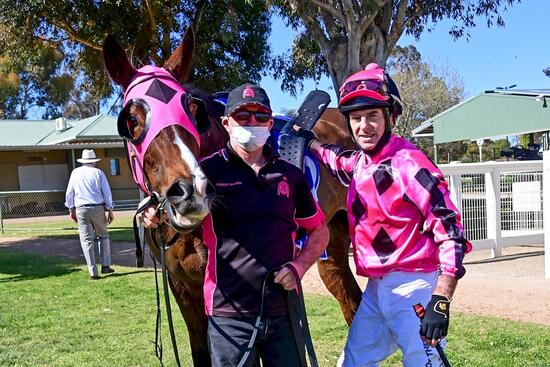 Little Miss Gutsaa delivered on her early promise when she romped to a three-length maiden win at Swan Hill on Friday.

Trainer Jamie Edwards said the four-year-old mare was better than maiden class and was expressed his frustration that it had taken her so long to win a race with her.

“She can really gallop, and I was disappointed that she had not won a race before today,” Jamie said.

He said he had good hopes for the daughter of So You Think but he was a bit deflated after she could only finish sixth at Echuca when resuming last start.

“I brought her back for this time of the year because I thought she might be a spring horse but first up on face value she was a bit disappointing,” Jamie said.

“We took the blinkers off her at Echuca and she got back where I think the other horses probably intimidated her.

“We brought her here today with the blinkers back on thinking she would be hard to beat and it could not have worked out better.

“She jumped and put herself on the pace and was never really going to lose.”

“Today she pinged and left the lids a lot better,” Craig said.

“I gave her a squeeze up, she travelled really well, and she put the race beyond doubt very early.”

Leading most the way, Little Miss Gutsaa was backed from $4 to $3.30 second favourite and surged away in the home straight, easily accounting from Battle Tears and Choralist in the Jarrod Arentz Electrical & Solar Maiden (1200m).

Gary and Marie Allen, Barry and Shirley Reynolds, Trevor Reynolds and Catie Hocking own Little Miss Gutsaa who was named after a card game they play called Gutsaa.

Her owners are now hoping that Little Miss Gutsaa can build on this win and provide them with a good hand in the spring.