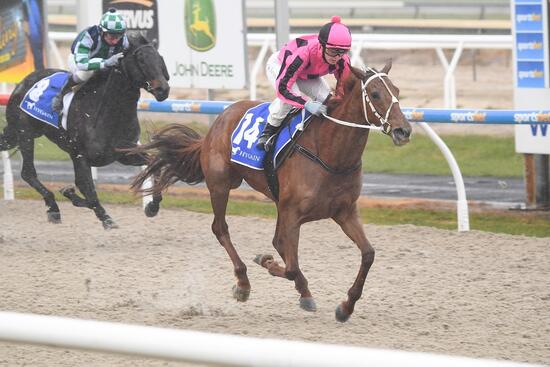 Young Hostess overcame atrocious weather conditions when she posted an overdue win at Ballarat on Thursday.

In gale force winds and lashing rain the bonny mare powered her way through the slush on the synthetic track to land the Hygain Winners Choice BM64 Hcp (2100m).

The victory was the first on Young Hostess for 20-year-old apprentice Madison Llyod who also finished second the seven-year-old mare at Terang in March.

Maddy, who has ridden 117 winners, is now in the box seat to remain on Young Hostess who may now target a city staying race for mares.

“Maddy still claims 3 kilos in town which would handy as Young Hostess is only a small mare at around 420kg,” assistant trainer James Edwards said.

“The horse is going really well and Maddy seems to get on well with her.”

James said the stable was “pretty confident” Young Hostess would win at Ballarat after a series of unlucky runs.

“She was just a bit unlucky at her last couple of starts when she got caught up in traffic and getting to the corner today I thought it was going to be a similar story again,” James said.

Maddy said her intention was to get cover in the howling wind but when the pace was so strong she settled back in the second half of the field on the rails.

“I just wanted a couple of horses to give me a bit of cover, but they went hell for leather for the first 600m,” Maddy said.

“I just let them all go and allowed her to get into her comfort zone.

“On the corner I had so much horse under me, all I had to do was wait for a run to come and when it came she launched strongly.”

After being hooked out to the middle of the track at the top of the straight, Young Hostess, backed from $4.40 to start equal $4 favourite, took the lead passing the 200 metres and careered away to win by four lengths from Bellx ($6.50). Mighty Oasis ($9.50) was another 2-1/2 lengths away third.