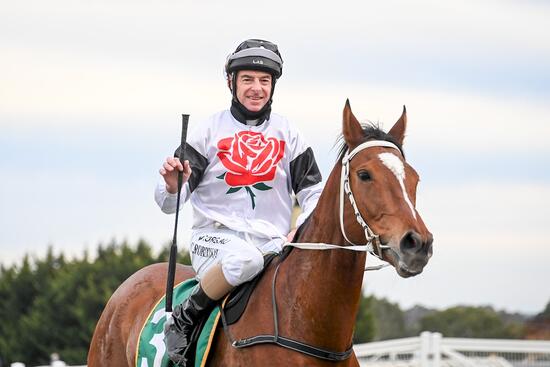 Handy mare Fortune Rose allayed concerns of a big open track and heavy ground with the deployment of revolutionary riding tactics to score at Hamilton on Tuesday.

Most jockeys have ridden her off the pace but Craig Robertson took full advantage of barrier one on the mare who began well and shared the lead most of the way in the Bet365 (1100m).

“I didn’t want to grab hold and get to a position where I was three-back on the rail and having her over race,” Craig said after the win.

“Although she was a bit uncomfortable in ground coming down the hill and around the corner, the race worked out perfectly for her.”

“Robbo” said Fortune Rose came off the bridle when Buckbay lurked alongside her in the lead and that she was clearly headed at the top the straight.

However once balanced up the daughter of Helmet responded well to Robertson’s vigorous riding, beating off her persistent challenger passing the 200m and surging clear to score by 1-1/4 lengths from Sunburnt and Queen Zyrah.

“We needed a good ride from that barrier, and we got it,” Jamie said.

“Just jumping her out and letting her roll was the way I have I wanted her ridden for long time and it could not have panned out better.

“I thought she was the best horse in the race, and she did a good job especially carrying 62kg.”

The Hamilton assignment only came about after Fortune Rose was denied a start at Stawell when the races were abandoned last week.

“The big open track doesn’t really suit her nor does the heavy (track), but she was so well this morning we had to run her,” Jamie said.

Fortune Rose has now won six of her 30 starts and is terrific form with two wins, two seconds and third from her last six starts.