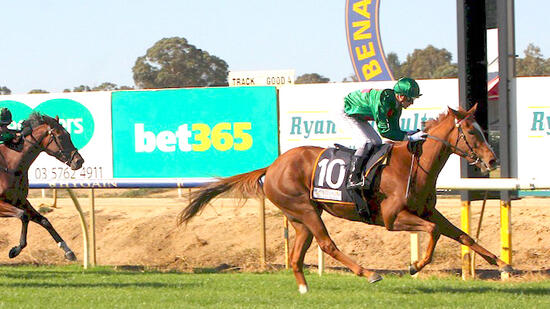 A large band of owners were celebrating after heavily backed filly La Spezia posted her maiden win at Benalla on Friday.

Successful breeder Mike Palmer races the three-year-old with some friends and about 80 members of the Thoroughbred Club of Geelong who have leased the half-sister to city winner Lorenzetti.

La Spezia is the second winner for the Thoroughbred Club who also are involved in the Vin Malady-trained Whowoodathort.

Trainer Jamie Edwards said it was a fantastic result for everyone involved with La Spezia who relished the step up in distance in the John and Vicki Martiniello Maiden Plate (2046m).

“Lorenzetti was a nice mile and a half horse, and I was pretty keen to get her out over a staying trip,” Jamie said.

“She’s very promising and won well, but still has a lot to learn.

“When she hit the front, she had no idea what she was doing and was all over the shop late.”

Despite her waywardness La Spezia, backed from $2.50 to $1.75, gave her supporters little concern as she raced away to score easily by 2-1/4 lengths from Johnny Buccaneer and pacemaker Flying Nostra.

La Spezia settled midfield on the rail and while jockey Harry Coffey said it would have been nice to be a pair closer to the lead, he was able to follow the other fancied runners Johnny Buccaneer and Yesugei at various stages.

“There was plenty of merit in the win today and she will keep improving,” Harry said,

“She got a nice run through, but she reached the lead a bit sooner than I had planned and got a bit lost,” Harry said.

He said that La Spezia may not just be stayer but had the potential to adapt well to racing well over any distance.

“She probably looks like she is bowling along nice and relaxed like she is going to get further but I think it is because she hasn’t learned to travel and quicken and do everything right just yet,” Harry said.

“I think she is a horse who will be pretty adaptable when she picks up and works out what she is doing.

“She could race over further or shorter, it wouldn’t matter.”