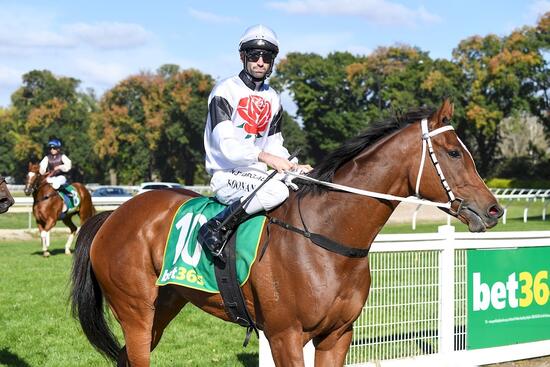 It is nearly 31 years ago since teenager Jodie Hetherington passed away but the memory of her lives on thanks to her family’s association with handy mare Fortune Rose.

Jodie battled cystic fibrosis which claimed her life when she was just 17 but she is remembered symbolically with nicely design racing colours carried by Fortune Rose.

A red rose, which is the emblem of Cystic Fibrosis Australia sits front and centre on the body of the white silks while black armbands symbolise Jodie’s passing.

“We like to think Jodie’s is looking down from above and cheering her (Fortune Rose) home,” said her sister Tracy Findlay.

The cystic fibrosis racing connection has been there for Tracey and her family who first got involved in racing when they joined a group to race Dalradian who won his debut at Bendigo when ridden by cystic fibrosis sufferer Harry Coffey.

A week later Dalradian won a $250,000 race on Cox Plate Day and a year later, at his last race start, he was Group 3 placed behind Flying Artie on Caulfield Cup Day.

But the connection with Fortune Rose is even more special as she‘s the first horse to race in the distinctive family colours.

“Owning her is something we have done as a family with close friends which acknowledges Jodie and cystic fibrosis,” Tracy said.

As usual, a band of owners were on course to support the five-year-old at Kyneton and jockey Jake Noonan couldn’t have timed his run any better.

After settling tailed off second last and six lengths off the lead, Jake made a wide run near the home turn on the daughter of Helmet.

She was still three lengths behind passing the 100 metres but scored in a blanket finish which featured four different leaders in the dying stages of the Coad Real Estate BM58 Hcp (1100m).

Tracy said it was pleasing to see Fortune Rose win again after the owners had considered winding up her career last winter when she was struggling for form.

“She went through a bit of a lull and wasn’t interested so we were thinking about letting her be a mum,” Tracy said.

“I think eventually letting her have foal is something we all want to do with her.”

Fortune Rose has raced 27 times for five wins and five placings and earned $97,960.

“We are not in it for sheep stations or winning Ferraris,” Tracy said. “It’s just for fun and going to the races and getting together,” Tracy said.