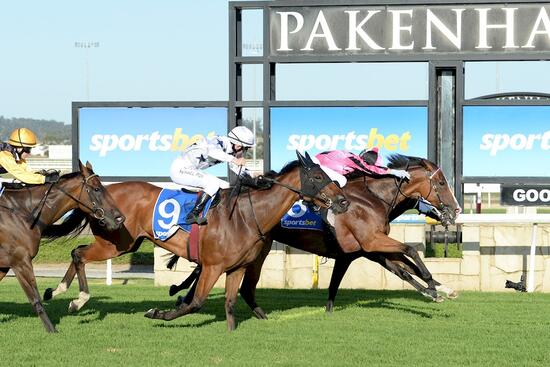 It wasn’t the script trainer Jamie Edwards was expecting with If At First who would have been a certainty beaten had she not won at Pakenham on Thursday night.

The former New Zealander was having her second start for the stable but hardly saw daylight as she was hemmed in on the rail behind the leader for most of the race before squeezing between runners late for a last stride win in the Watch Live on Sportsbet Maiden (1400m).

“I only gave Daniel (Moor) one instruction and that was to not get caught up in traffic and it looked like he was never going to get out,” Jamie said.

Daniel explained after the race that If At First “would have been something beaten” had she not found the gap to nose out Feminine Mystique and Isolating in a thrilling finish.

He said was mindful of not digging up early on the daughter of Choisir as she had over-raced at her previous start but he hadn’t bank on the leader ‘throwing it in park” and slackening off to “a ridiculously slow pace”.

Owned by Greg Perry’s Greenwich Stud Pty Ltd, If At First launched her racing career in New Zealand in March last year but got injured after some encouraging performances.

“She showed a heap of ability in New Zealand but had to have surgery to her hind fetlock and go for a long break,” Jamie said.

“We gave her a couple of trials and she went okay, but she probably found the 1200m too short (finishing fourth) at Donald first-up.

‘It was a good result to win over 1400 metres with her second-up, but really she is going to be a front running miler, 2000 metre horse.”

If At First has only raced nine times but her pedigree suggests there is plenty to get excited about.

Her younger half-brother Johnny Get Angry won last year’s Victoria Derby and her grand-dam Pavlova was a JRA Cup winner at Moonee Valley and finished fourth in the Queensland Oaks.

It is also the same family as Caulfield Guineas runner-up Fubu and SA Derby winner Markham who was third in the 1997 Melbourne Cup and fourth in the Caulfield Cup.