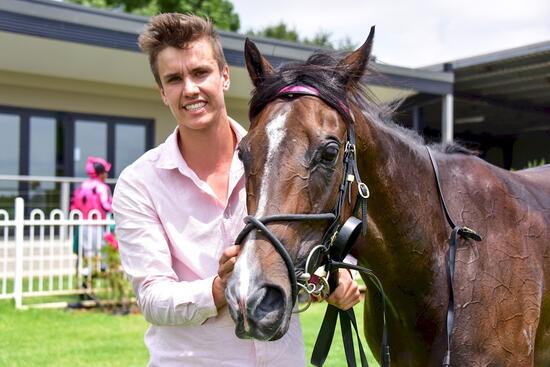 Promising mare Dwelt posted a well-deserved maiden victory when she scored at Ararat on Thursday.

The four-year-old went to the races with dapples all over and ran up to expectations taking out the Harvey Norman Ararat Maiden Plate (1100m).

Despite an easing $3.20 favourite and being a touch tardy in to stride, she sat outside the leader Catch the Drift and drew away to a 1-1/4 length victory over the pacemaker with Excuses Excuses another half-length away third.

Assistant trainer James Edwards, who floated the mare to Ararat, said he was confident Dwelt would run well after her brave second when resuming at Moe eight days earlier.

“She was a bit sticky away out of the gates today but the race panned out how I thought it would with her sitting outside the leader and proving too good late,” James said.

He said the stable was a bit disappointed how Dwelt’s first campaign developed with not much going right for the daughter of Dream Ahead in her three races.

“We weren’t disappointed with the horse, just that things didn’t work out for her,” James said.

“At her debut was raced four-wide without cover and at her second start she shared the lead and weakened in the worst part of the track.”

He said Dwelt was spelled after she “was really crook” after finishing unplaced at Casterton on August 30.

“We gave her a nice break and she has come back terrific this campaign,” James said.

“She was really tough first-up and hopefully she can now build on her maiden win.”

Greg Perry’s Greenwich Pty Ltd owns Dwelt who has a strong staying pedigree with her Zabeel dam Our Josephina winning over 2200m and her grand-dam Pavola, a JRA Cup winner and fourth in the Queensland Oaks.

Her family also includes SA Derby winner Markham who finished third in the Melbourne Cup and fourth in the Caulfield Cup.