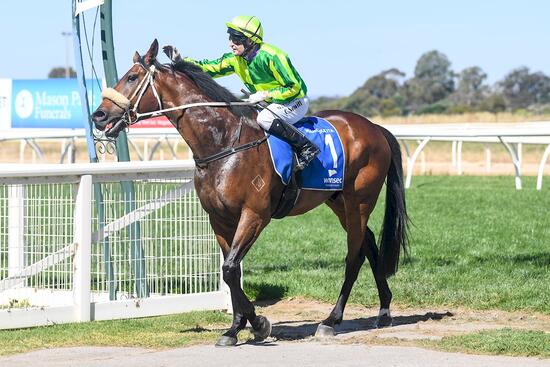 Promising stayer Diamond Luke appears an improved galloper after launching his summer campaign with a dominant win at Wangaratta on Monday.

The five-year-old was having his first start since June and race tactics to have him more forward paid off when he took out the Winsec Savings and Loans Class 1 Hcp (1590m).

“We have been focussed on trying to put him into the race a bit more and it was great to see him settle closer at Wangaratta,” trainer Jamie Edwards said.

“Last time in he was giving away too much start and that style of racing was always going to make it hard for him to win races.

Despite his racing pattern he posted a Kilmore maiden win over 2000m and placed at 2440m at Geelong.

Diamond Luke was scratched because of the heavy track at Geelong last week but the Wangaratta race over a bit more ground suited him better.

“His work has been remarkably sharper this prep and we were keen to see what he could do over the mile first-up,” Jamie said.

Ridden by Craig Newitt, Diamond Luke settled beautifully in fifth place, three lengths off the lead, and when asked to make his run quickly gathered in the

Leaders on the turn.

“He just picked up and went straight past them, but then he got a bit lost when he hit the front,” Newitt said.

He said Sinamay threatened in the final 100 metres but when Diamond Luke sensed the challenge he surged and went on to score a length victory. Lavrovsky filled third place, three-quarters of a length away.

Diamond Luke races in the same gold and green colours of promising maiden galloper Lady Canford who had no luck at Yarra Valley last Saturday.