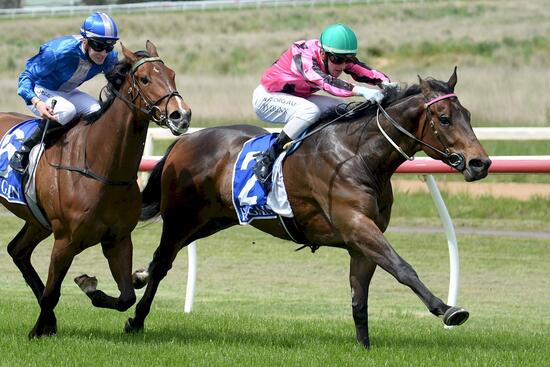 Flat Kapper posted an overdue maiden win when he fought out a desperate finish to score at Hamilton on Wednesday.

The four-year-old was a heavily backed to $3.10 second-favourite and tenaciously held off Bethpage ($2.60) to score by a half-length in the Timmy Berry Memorial Maiden (1100m).

Lacrima was no match for the two favourites and finished 6-1/2 lengths away in third place.

After being subjected to wide runs at four of his previous five runs, Flat Kapper was drawn to win at Hamilton where he jumped from gate two and was never headed.

“There was plenty to like about his win,” trainer Jamie Edwards said.

“He was there to be beaten by the favourite but when the question was asked, he put his head out and had a real crack and was strong to the line.”

Flat Kapper’s only other placing was at his second start where he drew in the inside barrier.

“We always felt he was much better than a maiden galloper,” Jamie said.

“He had tough wide runs just about every start and it was often made worse with him hanging out.

He said a ridged bit had helped straighten up Flat Kapper in his races.

“It was an overdue win and hopefully he can go on with it now,” Jamie said.