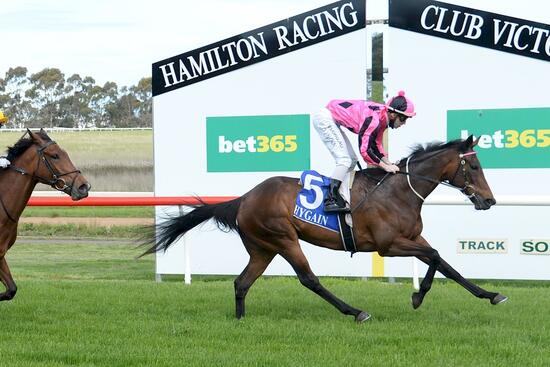 Nine-year-old Kawabata has made a successful comeback to the track after two frustrating years in the breeding barn.

The tough staying mare Kawabata defied the odds to post her first win in three years with an emphatic last to first victory at Hamilton on Wednesday.

Off a 102-week break, she was unplaced at her first three starts this campaign but hinted that she was a close to a win last month with a fast-finishing third over 2100 metres at Echuca.

“I was pretty nervous about resurrecting her racing career.

“Returning a nine-year-old mare to the track after a tough time at stud is something that is very rare and certainly something I have never done.

“But credit to the owners as it was a big decision to bring her back after she twice couldn’t hold a foal, and it worked out for them.”

Dylan Dunn rode for luck on the mare and after she had tailed of nearly three lengths in the early stages, elected to take the shortest way home on the rails. She was awkwardly placed second last inside the favourite Like the Clappers at the 800 metres but the race opened up for her near the turn.

“I was worried when I saw him riding for luck, but she tracked up really well and was clearly the best horse in the race,” Jamie said,

“She tries hard and she hit the line really strongly to get the win but the big question for the owners now is whether she races on or goes back to stud.”

Kawabata is a well-bred daughter of Encosta de Lago from Queensland Oaks and Derby winner Riva San and is likely to go to Magnus should she be retired again.

She has won eight of her 57 starts and placed on another nine occasions for $185,620 in prizemoney.

“Sending her off to stud on a winning note would be a fitting finale for her,” Jamie said.