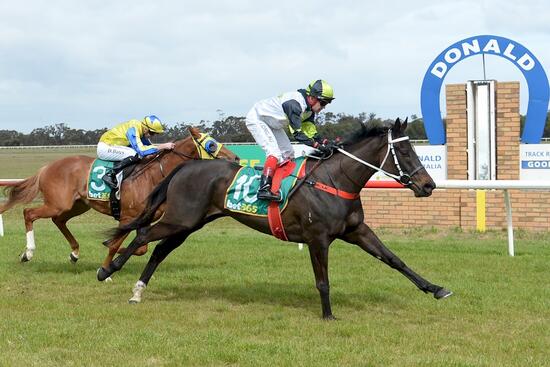 Heavily-backed mare Evader justified an avalanche of support when she powered home to score her maiden win at Donald on Friday.

Sportsbet opened the daughter of Skilled at $6.50 but she was smashed in to $2.50 by the time she jumped in the Donald and District Community Bank Maiden (2008m).

Having her third start for the stable, Evader jumped sideways at the start, but it was the only issue for her as settled fifth on the rail, four lengths off the lead.

Throughout the race, jockey Dean Yendall tracked the Lindsay Smith-trained Clever Approach which opened odds-on at $1.75 and drifted to $2.80 in the wake of the support for Emsley Lodge galloper.

When Clever Approach left the rail on the turn, Evader was in quick pursuit right behind, following the gelding to the middle of the track before attacking strongly on the outside.

The last 200 metres proved a match race with Evader’s class shining through to score a length victory over the former New Zealander who has now fished second five times in nine starts.

Third-placed Arizona Drifter headed the rest of the field five lengths away.

Trainer Jamie Edwards said Evader was a promising stayer and expects that she will win plenty more races.

“I think she might be a pretty progressive stayer,” Jamie said.

“She has always looked like she would get over a trip and she appreciated the jump up from 1600 metres to 2000 metres today.

“Judging on what she has shown us so far she should go through her grades pretty well.”

Evader has now had five career starts, three of them for Emsley Lodge this campaign including a fast finishing fifth at Donald (1354m) and third over 1600 metres at Swan Hill.