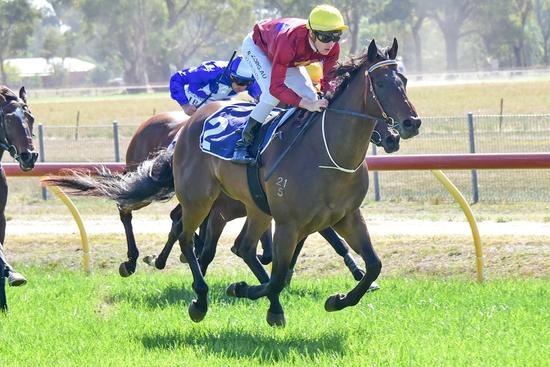 Well-bred four-year-old Mutanaaseq made it look easy when he scored a soft but overdue maiden win as part of a winning double for the stable at Avoca on Saturday.

The gelding had finished second four times in his previous 14 starts but Dylan Dunn rode him perfectly to land the Bet365 Odds Drifter Protector Maiden (1860m).

“He was certainly due to win one,” trainer Jamie Edwards said.

“He has always shown he was better than maiden class and it’s a little surprising he hasn’t won one until now.”

Stakes performers Oregon Dreamer and Zapurler are among those who have beaten him into second place.

A son of Snitzel, Mutanaaseq unsurprisingly cost $450,000 as a yearling being from the Queensland Oaks runner-up Zenella and features dual Group One winner Tristalove as his third dam.

He found his was to Emsley Lodge when Brian O’Dwyer bought him after had failed to show much in three barrier trials with another stable.

Mutanaaseq has become accustomed to racing on the speed but at Avoca settled midfield as Assoluta set a strong pace.

Ridden along five lengths off the lead at the 700 metres, he quickly made ground approaching the 400m and was far too good in the home straight.

A dominant $1.80 favourite he was eased down in the closing stages to score by 1-1/2 lengths Panda’s Nosey Boot and Hallo Poppet.

“He deserved the win after only being beaten a couple of lengths at his two other runs in shorter races this campaign,” Jamie said.

“The race was perfect for him and it was good to see him win with plenty in hand.”