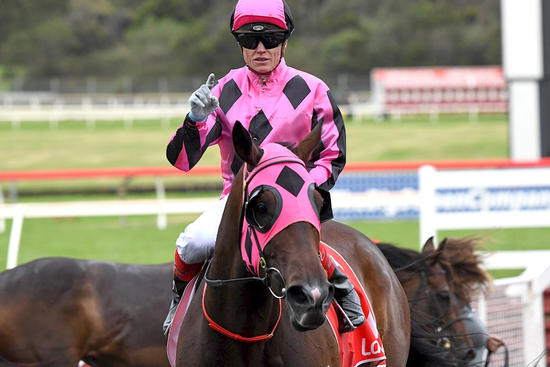 Trainer Jamie Edwards took special pride in the presentation of Minyinga at Sandown on Wednesday and the five-year-old lived up to her looks when she scored at bolters odds with top jockey Craig Williams aboard.

“I’ve probably been training for 25 years and I don’t think I have turned a horse out in better condition than she was today,” Jamie said.

“She had dapples from her ears to her bum and it was great to see her rewarded for her consistency with a city win which we always thought she had the ability to achieve.”

Jamie had planned to see Minyinga ($31) one out and one back in the run but Craig Williams improvised when he pushed forward and crossed to lead and then effectively control the Ladbrokes Odds Boost Handicap (1300m).

Second favourite Alexander Dreaming ($4.40) was at Minyinga’s girth entering the home straight but was beaten off at the 300 metres as the Emsley Lodge homebred charged away to a three-length victory.

Angelic Spirit ($11) ran on to finish second, a half-length ahead of Alexander Dreaming.

Jamie said the way the race panned out made it impossible for anything to catch Minyinga, and she ran home her last 600m in a blistering 32.87s.

Craig was particularly impressed with the win and noted that Minyinga was the only leader to face the strong breeze and score all day.

“She did it tough which certainly adds merit to her win,” Craig said.

“She rarely gets beaten more than two or three lengths so it was good to see her get some luck today,” Jamie said.

Minyinga still has plenty of racing ahead of her and she has a couple of relatives who are stablemates.

By Elzaam, Minyinga is the first foal from winning Street Cry mare Rue De L’Amour and is a half-sister to winning Fiorente gelding Mannza and unraced two-year-old Mannzaratti.