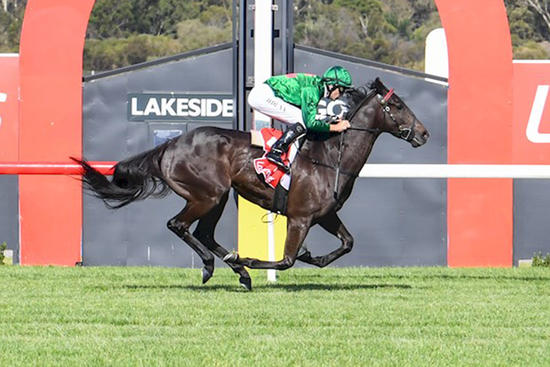 Unlucky galloper Lorenzetti will target a summer stayers’ series at Moonee Valley after posting his first city win at Sandown on Wednesday.

The four-year-old was the third winner in four days for Emsley Lodge when he stepped up to 2400 metres and raced away with the Ladbrokes Odds Boost BM70 Hcp.

Ridden by Dwayne Dunn, the son Al Maher enjoyed a perfect trail six lengths off a good tempo before improving near the turn and taking the lead approaching the 200m.

Lorenzetti defied a betting drift from $4.40 to $5 to score by 2-1/4 lengths from Unsettling and Reliabelle.

The win was a welcome change of luck for the gelding who was a fast-finishing first-up third over 1500 metres and again flew home at his next start after getting shuffled back at a crucial stage at Moonee Valley.

His last start second to the in-form Hard ‘N’ Tough over 2000m at Warrnambool had him primed for the extra distance at Sandown.

“We backed him up today a week after Warrnambool because we have the stayers series at Moonee Valley in mind for him,” trainer Jamie Edwards said.

His next three runs will be over 2500m in the series first heat on January 24, another heat on February 7 before the final on February 28.

Lorenzetti is the second city winner that owner Mike Palmer has bred, his other being Dylan Thomas gelding Macrobius who was from Moorunda Lass and won at Moonee Valley.

Lorenzetti has won three of his 17 starts with his other two wins at Bendigo and Echuca.

His Sandown success has helped Emsley Lodge to a good start to 2020 and after Pink Angel won at Warrnambool last Sunday and Honeywine won at Echuca on Monday.