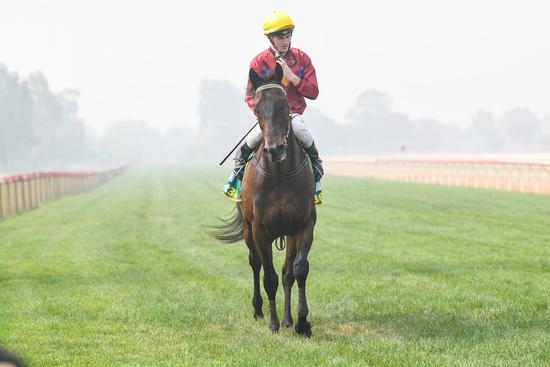 Six-year-old Honeywine appreciated the drop in class when he posted an overdue win at Echuca on Monday.

The son of Street Cry, who had won his only other start at the track in BM70 grade back in July, proved far too good taking out the YMCA Wangaratta BM64 Hcp (1300m) despite losing a plate in the run.

For experimental purposes only, Honeywine for the first time raced in front bandages but it did not deter punters who backed the wet tracker from $6 to $5 after a downgrade to a soft 6.

Ironically a smoke haze from the Gippsland bushfires enveloped Echuca, a sombre reminder of how dry conditions have been this summer.

When people are doing it so tough it is hard to celebrate too hard and the stable donated a percentage of Honeywine’s prizemoney in appreciation of the CFA volunteers and the RSPCA.

Owned by Brian O’Dwyer, Honeywine has won four of his 31 starts but trainer Jamie Edwards believes the gelding is much better than his record suggests.

At his previous start, he led a BM70 field in the home straight at Bendigo but was swamped by horses swooping out wide and finished seventh just over three lengths from the winner.

At Echuca, he again looked the winner a long way out despite racing three-wide with cover three to four lengths off the lead and improving wider on the home turn.

He found the better going outside the middle of the track in the straight and under 61.5kg swept to the lead passing the 200m metres, going on to score by 1-1/2 lengths from Ghost Doctor and Millie The Missile.

It was Honeywine’s first win since his Echuca win last year.

“Brian is a very good owner of ours who has stuck by this horse and judging by the way he won you would reckon he would win more races,” Jamie said.

Dylan Dunn said Honeywine was “a tricky ride” in that he resents the whip.

“I gave him one at the 100m and he dropped back two gears but back to hands heels he got the job done,” Dylan said.