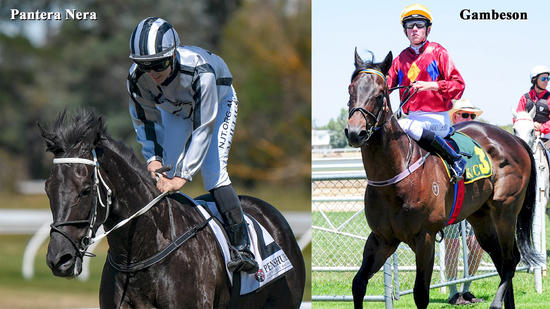 Emsley Lodge came home with a winning double after clocking up more 1000km in trips to two different racetracks on Boxing Day.

Five-year-old Gambeson ($13) caused an upset when he was successful up north at Kerang and four-year-old Pantera Nera ($3.80) was one of the favourites winning 340km away in the Western District at Penshurst.

“It was a long day for everyone involved but it was worth it,” said trainer Jamie Edwards after his 600km round trip to Kerang.

Gambeson had struggled for form at three runs this campaign but stretched out to 1400m for the first time since joining the stable a year ago was far too good in the Barham Meats BM58 Hcp.

“He has been disappointing this campaign and it was good to see him put it together and get an overdue win,” Jamie said.

“He won his first start for the stable over 1100m in January last year but we didn’t think it would take him this long to win another race.

“At Kerang got in well with 55kg after the three-kilo claim and he seemed to appreciate stepping up from 1100m last start to 1400m.”

Apprentice Melissa Julius made her riding comeback at Penshurst and brought up her 99thcareer win landing Pantera Nera in the Pat Hassett Memorial BM52 Hcp (1476m).

Melissa, 28, stepped away from racing in June but after earlier in the day finishing third on stablemate Sistine Avenue, she got up on Pantera Nera to score a 3/4-length win over Denominator and Arkamun.

“He deserved the win after being the victim of outside barriers and wide runs at his two other starts this prep,” Jamie said.

“He did a good job under 60kg and Mel couldn’t have ridden him better.”